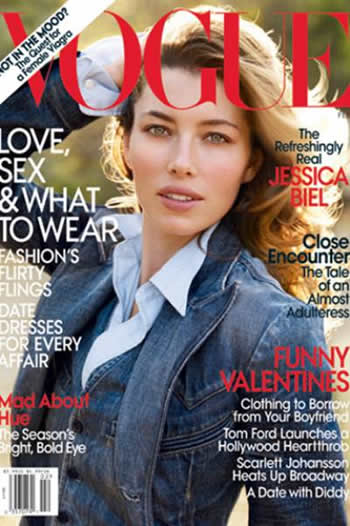 Below is a glimpse of the interview by Jonathan Van Meter:

On her parents: Her father, Jon, worked for GE for many years and ran his own business consultancy in Boulder. "He is extremely motivated and ambitious," she says. "I get those qualities from him." Her mother, Kim, grew up one of six kids in a small town a few hours southwest of Denver where Jessica and her parents both own cabins on adjoining properties. Her mother’s side of the family is part Native American: Those crazy-high cheekbones are shared by her younger brother, mother, and grandmother.

On her run of bad luck with great directors. Cameron Crowe cast her in Elizabethtown, a film that flopped on a grand scale, and David O. Russell gave her the lead in Nailed, based on Kristin Gore’s novel Sammy’s Hill, about a woman with no health insurance who gets a nail lodged in her head and goes to Washington to fight for justice. "Jess was tired of being cast as merely sultry and was more than ready to throw down for all the weird behavior a nail in the head gives her character," says Russell. "She auditioned and went for it—she is fearless." Gore (Al’s daughter), who co-wrote the screenplay with Russell, spent three months with Biel on the set in South Carolina. "I think her range is something that has yet to be discovered by the larger world," she says. "She also has this preternatural self-assurance." The production shut down because of money problems with just one thing left to shoot: the scene where Biel gets the nail shot into her head. That was in 2008, and with each passing month it grows ever less likely that her most challenging film work to date will make it to the screen.

To read the rest of the interview visit Vogue.