Karl Lagerfeld has designed a range of Coca-Cola Light bottles 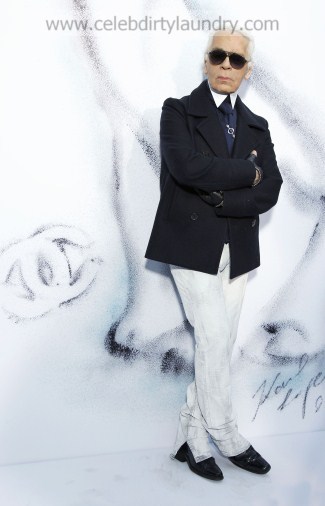 The Chanel designer Karl Lagerfeld picture above at the Chanel Ready to Wear Fall/Winter 2010/2011 fashion show in Paris, France on March 9, 2010 has created a limited edition bottle for release in France, made in aluminium and featuring his own silhouette.   As well as designing the bottles, he also shot the advertising campaign starring models Coco Rocha and Baptise Giacobini.

The bottle goes on sale in France on April 28 and will sell for 47 euros and comes with a matching bottle opener.   In the campaign, Coco is seen in a Lagerfeld-inspired outfit, including his eponymous high-collared white shirt and a black neck tie.  It is not the only collaboration Karl is committing to this month – it was recently announced he would be working with luxury Italian label Hogan in 2011.

In a statement, Hogan said it was looking forward to working with the German-born fashionista.   It read: "Karl Lagerfeld has built a universe where every line is controlled and every detail has meaning. From this Cartesian spirit has arisen a hyper-modern and structured style at the top of its form. A look and an attitude transcribed through graphic codes that have become emblematic signatures."  Photo: Fame Pictures