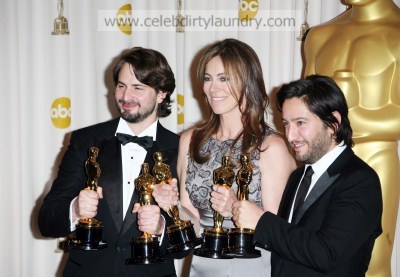 She said: "It’s the moment of a lifetime. And thanks got to my fellow nominees who have inspired me for decades."    Speaking before the ceremony, Cameron paid to tribute to his former spouse, saying: "I’ve extolled her virtues to the world and supported her as a film-maker. I’d be tremendously proud if she won."

Sandra Bullock was named Best Actress for her role in ‘The Blind Side’, beating Meryl Streep, Dame Helen Mirren, Carey Mulligan and Gabourey Sidibe.   Looking stunning in a silver gown, the 45-year-old beauty – who played Southern matriarch Leigh Anne Tuohy in the film – dedicated the award "to the mums who take care of the babies and children no matter where they come from.
"To that trailblazer… I thank my mother so much for this opportunity that I share with these extraordinary women."

Jeff Bridges triumphed in the Best Actor category for playing a hard-living country singer in ‘Crazy Heart’.   The 60-year-old star – who was up against George Clooney, Morgan Freeman, Jeremy Renner and Colin Firth – said: "Thank you mum and dad for turning me on to such a groovy profession. This is honouring them as much as it is me."

Best Supporting Actor went to ‘Inglourious Basterds’ star Christoph Waltz, while Mo’Nique triumphed in the Best Supporting Actress category for her role in ‘Precious: Based on the Novel ‘Push’ by Sapphire’.   She said: "I would like to thank the Academy for showing that it can be about the performance and not the politics."

Critically acclaimed 3-D film ‘Up’, also shortlisted in the Best Picture category, won Best Animation.   The awards – which were held at the Kodak Theatre in Hollywood – were hosted by Steve Martin and Alec Baldwin, becoming the first duel hosts in 23 years.  Photo: Fame Pictures