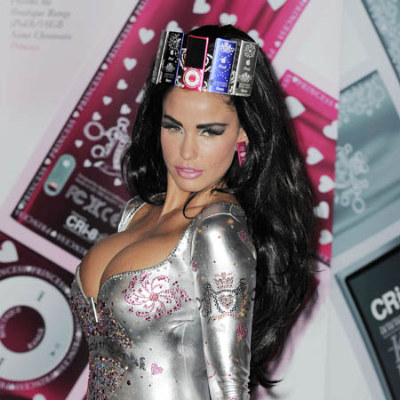 Katie Price wants us all to know that she’s still here. So what’s a famewhore to do?!? Wear a crown made from cheap cell phones/iPods, or dumb crap, that’s what! And of course, she rambles on about some body modification that she can’t commit to because she’s so scared. Wah.

What she also can’t commit to is being a responsible famewhore and not doing silly crap like this to keep her name in the press. She opened her mouth about wanting a tattoo, but doesn’t want to really do it, because it might hurt. Special thanks to Captain Obvious there.

She said, “I think anyone who has tattoos done will agree, they are very addictive. But I’ve got them in places where you can’t really see them. I’d love one all over my back, but I just can’t bare the pain. I haven’t thought about what tattoo I would get exactly, if I ever do get another one. I won’t say never, but if I did I’d like a pair of wings or something on my back. Or something that goes down to the bum cheek. But it’s just the pain.”

She also blathered on about wanting a sleeve, adding, “I say I’d like a sleeve. There’s loads of ideas, loads of tattoos. When you go into a tattoo shop there’s always loads.”

I’m just thankful that she lives across the pond and not in the States. We already have Heidi Montag, thank you very much.