Lady Gaga Explains Her Meat Dress At The VMAs 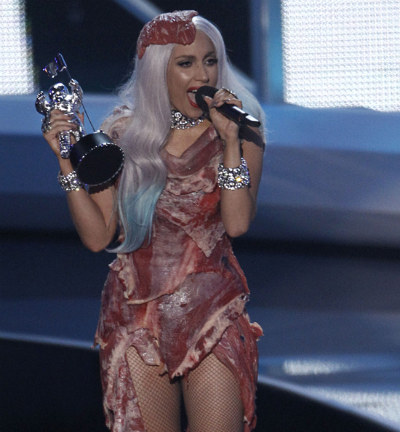 Last night at the MTV Video Music Awards, Lady Gaga accepted an award wearing a dress made up completely of raw meat. Recently, she was featured on the cover of Vanity Fair wearing something similar. Sure, she’s still trying to shock the world with her outlandish style, but this is really taking the cake.

I love Lady Gaga’s music, but these outfits made of meat are a little much for this little monster. She revealed her new album title, Born This Way. But it wasn’t that which made us go ‘Ewwww’. It was that maggot drawing dress that she was sporting.

In an interview with Ellen DeGeneres, Gaga tried to explain the dress. She said, “It’s certainly no disrespect to anyone that’s vegan or vegetarian. As you know I’m the most judgment-free human being on the Earth. It has many interpretations, but for me this evening it’s [saying] if we don’t stand up for what we believe in, if we don’t fight for our rights, pretty soon we’re going to have as much rights as the meat on our bones.”

She added that her interpretation goes further than that. She said that it’s really meant to say that she’s “not a piece of meat”. Interesting way to put that, don’t you think??

When she was called up to accept the Video Of The Year Award, she said, “I never thought I’d be asking Cher to hold my meat purse.”

Would you hold her meat purse? That is so gross on so many different levels. I just can’t.

Update: In addition to her crazy fashion sense, Lady Gaga also brought forth the discharged service members from the military, affected by the “Don’t Ask, Don’t Tell policy:

Good for her for bringing this issue to light! I just wish that she would bring more fashionable choices forward, as well. Wearing real meat to an awards show had to be pretty sick.