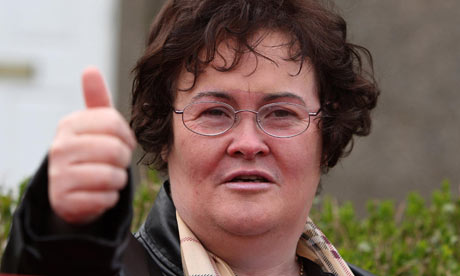 When Susan Boyle comes to mind there are two adages that seem immediately appropriate: ‘never judge a book by its cover’ and ‘cream always rises to the top.’

No less a maven than music industry whiz Simon Cowell was initially flabbergasted at Susan’s appearance on Britain’s Got Talent – but then he heard her sing and became one of her biggest fans.   When one ignores Boyle’s rather stodgy, stumpy, and plain appearance as well as her lack of stage presence and focuses on her singing, it becomes apparent that there is no keeping this woman down – she was simply destined to rise to the top.   As she herself has said “… why should it matter as long as I can sing? It’s not a beauty contest.”

Boyle is truly a modern day phenom – completely amateur and without any serious musical background or training – she burst onto the international music scene courtesy of the TV talent show mentioned above and is now a big star.   She sings beautifully and clearly, you can hear her every word and unlike the bulk of today’s so-called talent she is not over-produced; there is in fact no need to over-produce her since she has a great voice all on her own.   This charming and unassumingly modest lady, who spent more than her first 45 years in total obscurity, made it to the top without all the bells and whistles we almost always associate with top musical acts these days – no internet – no Twitter – no Facebook – no media hype – no outlandish costumes – just standing up there with total emphasis on the song itself.

Let’s contrast Boyle with another one of today’s big stars – Lady Gaga.  These two performers couldn’t be more different from each other if they tried.  For Lady Gaga the expression ‘the squeaky wheel gets the grease’ seems apt.   There has never been a bigger media monster than this woman, who apparently will stop at nothing to gain attention. 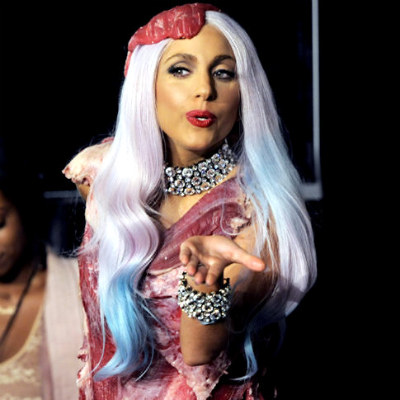 At the VMA Awards ceremony on September 12th, Gaga not only won what seemed like half of the awards, but appeared in the most outlandish costumes imaginable – even to the point of being unimaginable!   At one point she appeared clad in an outfit that looked as if she was wearing raw meat for her dress and shoes (including a meat purse she asked icon Cher to hold)! There is nothing El Gaga will not do for attention.

Perhaps what I find most irritating, is she pretends to adopt the attitude that she is somehow above the media frenzy, when she clearly is responsible for orchestrating it. She talks to her fans on Twitter and Facebook incessantly, but it is obvious by observing the frequency and content of the posts, that it is actually a publicity team doing the bulk of the posting, not her.  How condescending to her fans, how patronizing, how insulting!

Gaga has successfully assembled a string of pop hits completely derivative of today’s style of music, most of which is extremely over-produced. She claims the performers who influenced her the most were Queen and David Bowie, which in some ways is no surprise.    Bowie was the master of trying on personas and reinventing himself, and Queen’s lead singer, Freddie Mercury, was notorious for his over-the-top camp (though he was certainly an amazing singer).

Lady Gaga has a gigantic publicity mill working full-time across all forms of media to ensure that there is no escape from her.  Is she talented?   I can’t really tell.   Does she know how to play the game better than anyone else?   Yes, absolutely.

With Susan Boyle and Lady Gaga, we see female singing stars as different as could be.   Susan may be unsophisticated, but possesses a voice of rare beauty, not to mention an unassuming persona that people can not but help admire and sympathize with in this day of ultra-hype and overdone media blasting.   Lady Gaga, on the other hand, presents rather conventional pop tunes that do very well, not because they are necessarily so wonderful musically, but because of all the extra-musical bells and whistles she ties to her production and performance.   These, combined with her masterful use (abuse?) of all media to push her into the public eye, constantly insures her our continued attention and success.   But the question is – would Gaga be able to compete in a pure singing talent contest with Boyle?   Not a chance!