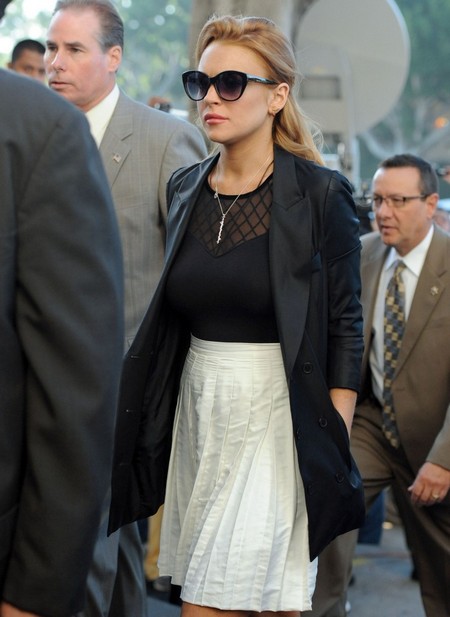 No surprise here Lindsay Lohan does not want to stay in jail.   Her lawyer is appealing the decision and trying to get Lindsay released on bail.

TMZ is reporting that:

Lindsay Lohan‘s lawyer, Shawn Chapman Holley, has just filed legal papers appealing Judge Elden Fox’s ruling that Lindsay should be held without bail.   Holley claims the judge must grant bail in such a case — and is asking the California Court of Appeal to vacate his ruling.   Unless the ruling is overturned, Lindsay could spend the next month in jail … waiting for the next hearing.

The judge has made a good decision – clearly Lindsay is laughing at the justice system.     She was in jail and rehab and was knew she would be tested for drugs and what does she do when she gets home?  Go right back to using drugs.  Her problem is she has too many enablers in her life her mother, her father, her friends and now her lawyer.  Let’s hope that she does not win the appeal and she stays in jail where she belongs.  If it was you or me who did this we would be sent back to jail very quickly.

The basic issue her is not the original criminal offense that Lindsay committed rather it is her repeated inability to follow the courts instructions on how to remain free while she waits trial on these original offences.  This started when she very riskily went to Cannes’s film festival in France almost guaranteeing she would miss her court appointment and to add insult to injury she had the gall to appear in court with F*!K you.  Despite this which would have landed just about anyone else immediately in jail she was generously given another opportunity to remain free as long as she did the rehab and then stayed clean.   But this was too hard for Lindsay and after she finagled a ridiculous early release from the rehab (who got bribed what to make this happen we don’t know) she immediately failed two mandatory drug tests.  Any judge even the court of appeals is going to see this clear pattern on Lindsay’s part which is her refusal to obey the law.