Little Regard For Lil Wayne 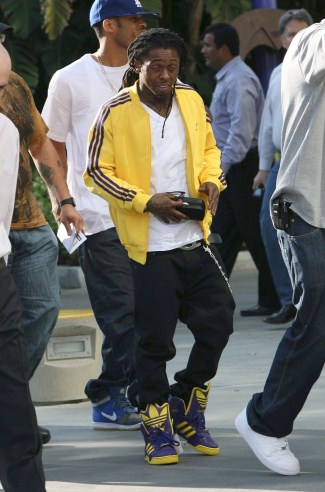 Rapper Lil Wayne is trying to avoid jail time on drug and weapons charges by entering a plea deal with prosecutors in Yuma County, Arizona.   During a change of plea hearing Friday in which he appeared via video from a New York jail, the 27-year-old Grammy winner pleaded guilty to one count of possession of a dangerous drug.   The charge stems from January 2008 when his tour bus was stopped at a border patrol checkpoint near Yuma. Authorities found cocaine, ecstasy and a handgun on the genius’s tour bus. Dwayne Carter (Lil Wayne) is scheduled to be sentenced June 30 and could receive what he thinks is a slap on the wrist – 36 months of probation.   He’s currently serving an eight-month jail term in New York after pleading guilty last October to attempted criminal possession of a handgun.

What Wayne (I refuse to refer to this dolt as Lil Wayne- its just too cute) doesn’t realize is that probation in a state like Arizona is taken seriously – it is not New York or Massachusetts in which probation is basically a joke.   In states like Colorado, Texas and Arizona many inmates prefer to complete their entire sentence rather than accept early release and probation.   Why you ask?   Well in these tough ‘conservative’ states law enforcement use probation to try to trip up repeat offenders by using such tactics as unscheduled and frequent surprise drug tests and searches.   One ‘mistake’ and the offender is back in the slammer for the remainder of the sentence and often longer! Someone like Wayne who is a known user of drugs and surrounds himself with an assortment of lowlifes so he can feel cool and appear tough has a very small chance to stay clean for 3 years.   You can be absolutely certain that complete abstinence from drugs and handguns will be a condition of the probation as well as frequent testing and visits with his probation’s supervisory task force.   Of course given the fact that he is currently sitting and doing time he probably feels that any agreement that keeps him out of jail is a good one… we will see.