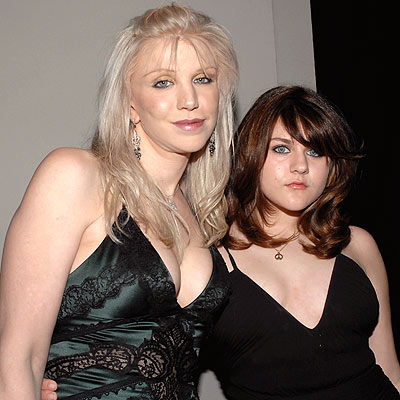 Courtney Love’s daughter Frances Bean Cobain– received an angry rant via twitter from her mother on the day of her 18th birthday, last Wednesday (18.08.10) when she legally inherited part of her father’s estate.   Sending the message to Frances “Yes dear Mommy is still crazy”.  Imagine having a crazy, self-absorbed women like this as your mother?

In her posting, Courtney – who was until recently the subject of a restraining order against Frances Bean – asked her daughter to come home, and accused her of leaving her “life in tatters”.

Perez Hilton claims to have since found a Frances’ twitter page, on which she wrote a message back, urging her mother to “find her soul”.

The message is quoted as reading:

“I pitty your inability to love yourself.  I hope you find your soul, wherever it may be. stop acting like a prepubescent feral cat (sic).”

The twitter account the post was made from has since been deleted, claims Perez Hilton it was genuinely Frances writing, as she had previously posted pictures of her tattoos and wrote about Lady Gaga.    Courtney, 46, and her daughter have had a fractured relationship, with Frances moving out of their home last year to be cared for by Kurt’s family, prompting a number of public rants and messages from her Courtney.

Frances inherited an estimated 40 per cent of her father’s fortune and although there are no figures available as to how much money this equates to, Kurt is the world’s highest earning dead musician, making an estimated $55 million per year.   Courtney claimed earlier this year that Frances “lives in a mansion by herself,” and was receiving $45,000 a month from her estate.

Does it seem so unbelieveable that Frances would have tweeted this?  What do you think?