LMAO Joan Rivers Says To Lindsay Lohan “Your Parents Are Idiots… I Will Pay For REHAB!” 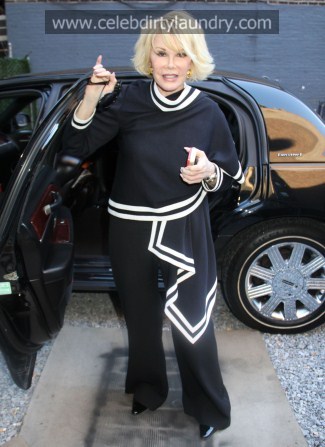 Ouspoken comedienne Joan Rivers insists she feels sorry for the Lindsay Lohan – who has been sentenced to 90 days jail for violating her probation for driving under the influence –despite recently branding her “dumb” and a “party skank” and says she is appalled at the conduct of the actress’ parents Dina and Michael Lohan.  No joke those two are a poor excuse for parents.

Joan said: "If I were Lindsay’s parents, I wouldn’t be on television discussing it, I wouldn’t be going on to Joan Rivers for doing a stupid joke on her blog, I would be taking her to rehab and a rehab where you don’t get your nails done.  “I think it is so sad, the road that this girl is going down. It’s appallingly sad… She better get into rehab and better get into it fast.   “Lindsay, I am pleading with you… you’re beautiful, you’re smart, you’re talented. Go to rehab, you’re young! Melissa and I will pay for your rehab!”

Joan also hit out at the actress’ ex-girlfriend Samantha Ronson – who blasted the 77-year-old comic for making jokes about her former lover – and urged the DJ to do more to help Lindsay.
She added to US TV show ‘The Insider’:

Under the terms of her sentence, Lindsay must enter an in-patient rehabilitation program after her release from prison.   The 24-year-old star is due to begin her prison term on July 20.