Machete Or The Good, Bad And Ugly 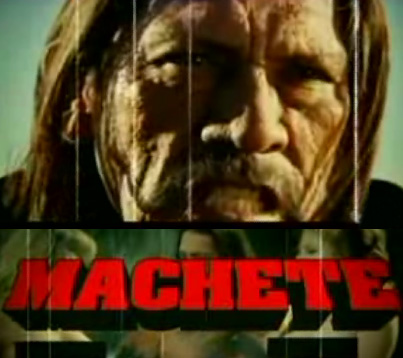 We saw Machete today at the local cinema enjoying a break from our self-imposed healthy weight-loss diet accompanied by plenty of popcorn – in fact getting the popcorn was the primary reason we went to the movies.   Machete  is an action film with a strange assortment of stars in the supporting roles and Danny Trejo playing the world’s ugliest man as the title character, “Machete.”   I won’t reveal anything about the plot here, but I will say that if the world worked the way it is portrayed in the film then anyone with an IQ of 110 or more would rule.   In other words, the story is very stupid and unbelievable. The average superhero comic book is more realistic and sophisticated than the script of  “Machete.”

Luckily the story’s lack of realism and believability is partially made up for by generally good acting and some pretty good action scenes.   However, you will definitely have had your fill of seeing people cut, carved, sliced open, decapitated, amputated, and disemboweled by large knives and machetes well before this piece of art concludes. One notable and surprising exception to the consistent good acting is Robert Di Nero’s delivery.   Di Nero plays a down-home, right wing Texas politician, but sounds more like a New York deli counterman with periodic weak attempts at speaking with a mild Texas drawl. Is this the best the Academy Award winner can do, or were the directors trying to be funny?   I fear Ethan Maniquis and Robert Rodriguez were NOT trying to be funny.   This flaw was made even worse because the rest of the cast all fit their parts well – the Mexicans were very Mexican, the Texans Texan, and then there was Di Niro totally out of place and sounding terrible. I can not imagine how the directors and producers let this slip by.

Next we had Lindsay Lohan who may be the worst actress I have ever seen, (and I have seen plenty) playing a very true-to-life role as a wealthy, spoiled trashy, promiscuous drug-addicted bitch with a heart of stone.   Not a very likable girl at all! They used a body double for the raciest scenes and that was probably due to her less than amazing physique rather than her modesty. Nobody watching the flick will be in a hurry to hire Lohan to star in their film.

Danny Trejo was excellent – the guy has a one-in-a-billion face that works wonderfully on the screen. You just can’t take your eyes of off him – yes he is ugly and has bags under his eyes the size of golf balls but that man looks like trouble with a capital “T!” A perfectly cast bad ass, he should offered many promising roles once the right people see him in this film.

Michelle Rodriquez was really good and Cheech Marin was entertaining as usual. Don Johnson was decent in his role as a psycho vigilante and Jeff Flahey stole the show as the Governor’s aid – this guy can really act. Stevan Seagal was his usual portly self – the guy still can’t act. It’s always fun however to see what sort of clothing he will don to hide his unsightly bulging gut.

All in all, Machete somehow works as a film and was certainly entertaining, and that is all that really matters. For my money it stands well above Stallone’s The Expendables – more clever and with superior acting. Of course Machete is not serious cinema, but neither does it pretend to be. The humorous “Coming Soon, Machete Kills”  in the film’s credits let us know that they know that they were not trying to be overly serious with this film.

Article first published as “Machete” or “The World’s Ugliest Man” In Review on Technorati.