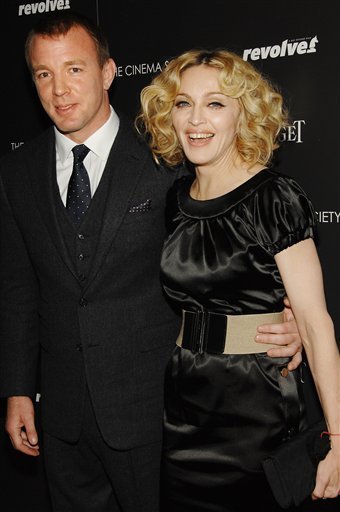 Madonna and her ex Guy Ritchie have reportedly fallen out over their son’s birthday party.    Guy apparently felt the party – at posh London eatery Supperclub – was too mature for their ten-year-old.  A source said: “It was a very cool, grown-up party with lots of soft drinks and canapes. However, Guy didn’t approve. He thought it was too grown-up.”

As entertainment at the party last month, Madonna, 52, hired a group of DJs and breakdancers to create a ‘rap’ theme, and invited 150 of Rocco’s friends.   Yukes how many ten years old have 150 friends :-) Describing the celebration, a source said: “The plan was to have a wholesome daytime party, with Rocco’s friends, including an alcohol-free dinner, with jelly, dairy-free ice cream and gluten-free brownies.”

The birthday dinner was, however, partly a joint celebration for Madonna too, as her birthday is five days after Rocco’s on August 16.  Guy and Madonna – who were married for eight years between 2000 and 2008 –are also said to have different views on where Rocco will be educated, with Madonna wanting him near her in New York and Guy set on his schooling taking place in London.  The couple also raise two adopted children, Mercy James, and David Banda, both five, together and Madonna has one daughter, Lourdes, 13, from a previous relationship.