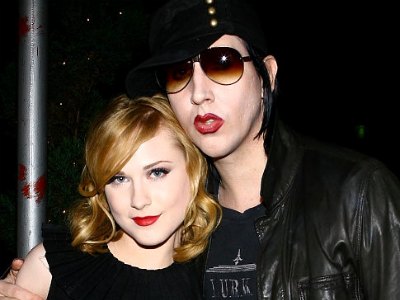 Shock rocker Marilyn Manson has just called things off with former fiancee Evan Rachel Wood. It probably had something to do with him borrowing much of her makeup, but that has not been confirmed as of yet.

He was actually the one to call off the couple’s engagement, which has me weirded out. He really thinks he can do better than her? I have a new respect for her now, only because she’s Queen Sophie-Anne and he’s getting to that creepy age.

After tossing her by the wayside, he was spotted partying it up in Los Angeles with a bunch of chicks. A snitch said, “They just broke off their engagement, and he needed a night out with friends.”

He’s 41 and she’s 22, he wears more makeup than Tammy Faye Bakker ever did and he creeps me out. What does she even see in him?