BY Robyn Good on May 18, 2010 | Comments: one comment
Related : Cameron Douglas, Michael Douglas 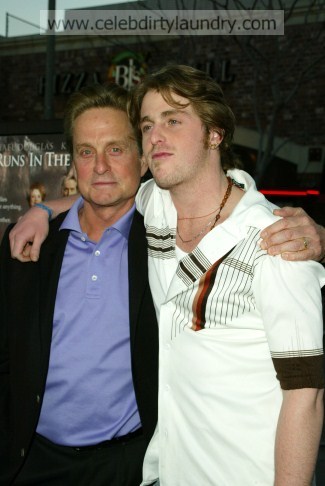 Cameron Douglas was sentenced to five years in jail last month after pleading guilty to possession and dealing methamphetamine and cocaine and the ‘Wall Street: Money Never Sleeps’ star wants his family to move on with their lives now.

Michael – who also has two children, Dylan, nine, and seven-year-old Carys, with wife Catherine Zeta-Jones – told New York magazine: “The things that are going on with Cameron are done with now. He’s gotten sentenced, so the tough part was the year before. But, you know the timing was not great. And he did that stuff. But that part is over with now, and we’re all just getting closer to summer holidays. A chapter has ended, and for our family it’s been rewarding, with certain pain for other members. Um, but hopefully a really good learning experience.”

Cameron, 31, was recently moved to a minimum-security prison camp in Lewisburg, Philadelphia, after being held at Manhattan’s Metropolitan Correctional Center since his arrest last August.   Cameron will live in a dormitory style barracks with rows of bunk beds and will also be expected to work, according to People.com.   Inmates are allowed outdoors in the evenings but they are expected inside once it’s dark, and are normally in bed by 10pm.
Michael recently said he believes prison will save his son’s life.

The 65-year-old star thinks the sentence will finally help Cameron overcome his addiction problems and allow him to make a "fresh start" when he is released.   Michael said:

"My son has not been sober for this length of time since he was 13 years old.   "So he was going to be dead or somebody was going to kill him, and I think he has a chance to start a new life and he knows that. And from my understanding, it’s going to take that amount of time for him to rebuild and start himself afresh.   "My son was a drug dealer, and he tried to kill himself for a while, and I can’t condone his behaviour. With all the mistakes and the disease that Cameron has, he is a great young man and I wouldn’t be supporting him if I didn’t feel that way."