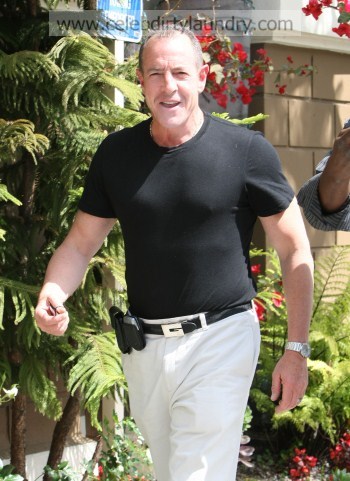 Despite his claims of being a concerned father, Michael Lohan certainly seemed to be in a great mood as he left The Four Seasons in Beverly Hills, CA on May 19, 2010.  Meanwhile  Michael’s daughter Lindsay actress is due before a judge in a Los Angeles courtroom today (20.05.10) and Michael is so keen for his former spouse Dina to be there to show their joint support, he has offered to pay for her flights from New York.

He told X17 online: "I’m hoping that my offer to Dina to fly out to be with Lindsay will be accepted. Her mom needs to be here."   However, one person who may miss the hearing is Lindsay herself as she is currently at the Cannes Film Festival in France but has reportedly claimed she has lost her passport and won’t be able to make it back in time.   But Michael claims she’s just trying to get out of the inevitable.

He said: "She’s already making excuses. I don’t think the judge is going to buy that she lost her passport. It kind of goes with the territory."   If Lindsay does it make it for the hearing, she may be sent to prison for violating her probation following her arrest for driving under the influence (DUI) in 2007.   But if she fails to show and the judge doesn’t accept her version of events there could be a warrant issued for her arrest, meaning she may be taken into custody as soon as she arrives in Los Angeles.   After she was initially arrested Lindsay – who spent 84 minutes in jail in 2007 – was ordered to complete an alcohol education course, which she has not yet done.  Photo: Fame Pictures