Michael Lohan Was Proud Of Lindsay At The VMAs 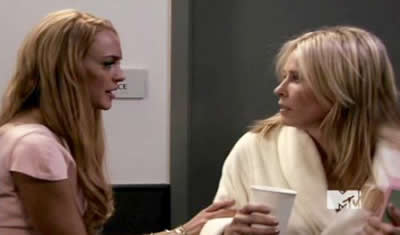 When Lindsay Lohan made her appearance at the top of the Video Music Awards last night, one person was happy. Sure it was a funny little skit when she was really poking fun at herself, but it made her father proud.

You know what should have happened last night, what would have made the show a hundred times better??? If they would’ve had Lindsay hosting. She can be funny and last night proved that. But could you imagine the hilarity that would’ve ensued if she were the host?

But, I digress. Back to daddy’s proud moment. Michael Lohan dished on Lindsay’s comeback performance and thanked God that his prayers were answered.

He said, “For a LONG time now I have been worrying and praying that the my ‘blessed and gifted’ daughter would find her way back. At times, I was too vocal, I made the wrong decisions and certainly handled things the wrong way. I constantly asked God that if it was His will to take me before her, which I stand by to this day. While some have made their pacts with the devil, I made mine with God, to take me first, or simply help Lindsay find her way back, and if so, He can do whatever He wants with me. Tonight, my prayers were met. On the MTV Music Awards, I saw, heard and KNOW that Lindsay IS back and I believe she will be better than ever.”

He concluded, “While we are all accountable for our own actions, I apologize to Lindsay, Michael, Ali, Cody and even Dina, and I thank God for answering my prayers.”

See what one little skit does for her career? It’s almost like she’s back to her Mean Girls self again, isn’t it? Now I can’t wait for her to shine in a comedy. Oh wait, that’s right. She’s still doing Inferno, isn’t she?