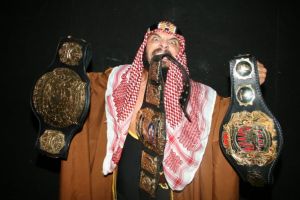 The Sheik continued his quest for wrestling supremacy by defeating El Gran Apollo for the NWA North American title this past Saturday during a match hosted by NWA Pro Wrestling Fusion. With the NWA Florida Heavyweight and NWA Midwest belts already in his possession, the addition of the North American placed the Sheik into legendary status.   He is the first man in the history of the NWA (National Wrestling Alliance) to hold a state, regional and continental title all at the same time making him the first NWA TRIPLE CROWN winner!

Momentous match between the Sheik and El Gran Apollo can be seen on YouTube HERE  Promoters across the globe have taken notice of the Sheik, a man who will stop at nothing to get what he wants; championship belts, especially ones containing gold!    The reigning NWA world heavyweight champion, Blue Demon, will now have to recognize the Sheik as a top contender. Determined to build a legacy, the Sheik has his sights set on destroying the Blue Demon and adding another belt to his collection, the NWA world heavyweight championship belt!

Ric Flair, Harley Race, and Dusty Rhodes are all men that have held the NWA World Title and The Sheik wants to add his name to that list.