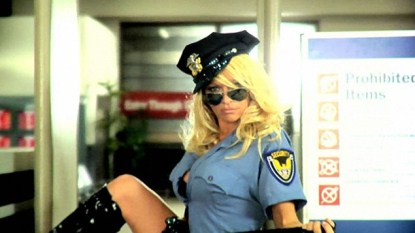 Pamela Anderson’s has appreared in tons of ads for PETA.  But an ad for PETA ‘Cruelty Doesn’t Fly’ has been banned from airports in Boston as too hot too handle.  The ad/video below shows Pamela dressed very risque as an airport security guard who strips passengers of leather, fur, and other animal skins.    Steve-O, Andy Dick, and Carol Leifer; a pair of nude models; and German punk icon Nina Hagen.

A PETA spokesperson says, “Given the groping that you see at security checkpoints – and the nudity that you see in body scans – we’re surprised that our lighthearted ad was deemed too risque.”

PETA was hoping to run the ads during the busy holiday season.  The ad is pretty suggestive.  What do you think is this an appropriate ad for an airport?  Should it have been banned?