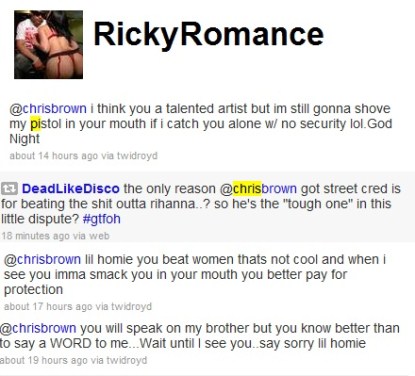 The fight between Chris Brown and Raz B has escalated.  Raz B’s brother Ricky Romance has stepped into the war.  Seems he takes offense at the back and forth insults of  Chris Brown and brother Raz B.  Romance stepped in and posted a video with a verbal threat saying “i think you a talented artist but im still gonna shove my pistol in your mouth if i catch you alone w/ no security lol.God Night”.  Although the fight between Chris & Raz B was pretty intense his brother took it to another level by threatening to kill Chris Brown.  The video with the threat was removed from utube but TMZ has a copy HERE.

In reponse to the rant Chris Brown tweet the following: Last night, Brown twittered a response, “Ill be in LA REAL SOON!!!!!!”

There wanna be gangsters remind me of kindergarten children having a fight in the school yard – they have the maturity of five year olds.  These fine men (and I use the term very loosely) are supposed to be examples for our youth – I think not!  Where are the police here?  Ricky Romance threatened someone and the dumb ass did it on a very public forum.  I am sure this twitter fight is not over stop by later for more developments!