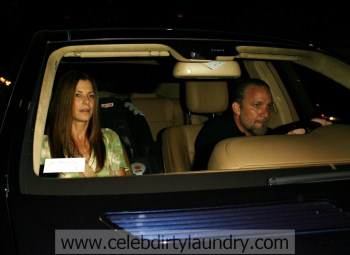 The ‘Blind Side’star – who has been nominated for Best Actress in a Leading Role at the forthcoming Academy Awards – admits she and spouse Jesse James are desperate for a break but never find the time to go anywhere.

She said: “We haven’t had a vacation in years. We keep talking about it but we still haven’t been.”  The 45-year-old star insists she is easy to please when she finally goes away as she likes to switch off completely and not have to do anything.  She explained: “We would like to go some place where there is 24-hour room service and then just lie in bed watching Spectra Vision.
“We don’t have big demands but we want movies on demand, we want room service on demand and just to lie there. That’s all. Well maybe not just lie there – but you know!"   However, Sandra is unlikely to get away in the near future as she has a busy month ahead.

As well as the forthcoming Academy Awards, Sandra has also pledged to attend the Razzies, for which she has been nominated for Worst Actress in her role in flop movie ‘All About Steve’.
She said recently: “I think it’s brilliant. It’s exactly the way it should have happened because it’s a great leveller.  Photo: Fame pictures