The Jonas Brothers Were Trapped In An Elevator 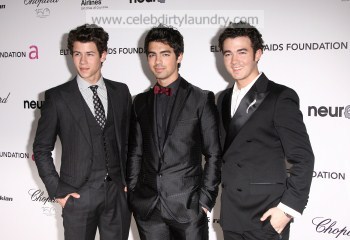 The Jonas Brothers had to be rescued after they were trapped in an elevator for 45 minutes.   The squeaky clean pop trio – made up of Kevin, Nick and Joe – had just treated thousands of fans to a free concert at The Grove in Hollywood on Saturday (15.05.10) but the siblings’ joy was short-lived after they got stuck in the enclosed space.

Joe said: "We were stuck in an elevator with eight people and our security guard Big Rob."   Diabetic Nick was particularly worried as he didn’t have his medication on him.   He said: "I didn’t panic. I just didn’t have my blood-sugar checker with me. No one had it on them, and I was afraid that if my blood-sugar level went low in an elevator we wouldn’t be able to do anything about it."
Joe admitted it had seemed quite funny at first but the longer it went on, the more they began to panic.

He added to People magazine: "It went from, ‘Okay, this is hilarious, we’re stuck in an elevator, okay press the button,’ to ‘This is crazy, okay, I can’t breathe, this is insane.’ "   Luckily the panic was soon over as the fire department came to their rescue.   Joe revealed: "It ended with the fire department coming through with axes."  Photo: Fame Pictures