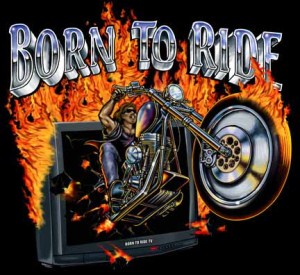 Singer Steven Tyler of Aerosmith, fiddler Charlie Daniels, professional wrestling icon Hulk Hogan, country music legend Willie Nelson, actor David Carradine of “Kung Fu” fame and the Undertaker from World Wrestling Entertainment all have one thing in common; they all made appearances on the popular television program, “Born To Ride.”

With fifteen years of television experience and currently producing their 750th episode, “Born To Ride” is celebrating its standing as the longest running biker enthusiast TV show in the country.

Every Sunday evening at 11 PM on MyTV Channel 38 (WTTA in Tampa), Ronnie and Debbie Galletti’s “Born To Ride” is broadcast throughout fourteen counties penetrating a potential 2,000,000 cable and non-cable homes.

‘“Born To Ride’ TV depicts the positive aspects of biker enthusiasts,” stated co-founder Ronnie Galletti. “Over 50 episodes of ‘Born To Ride’ TV are archived on our website or YouTube so everyone in the world can watch them. We have a very diverse audience within both the blue and white collar industries representing various races and religions. Over one-third of biker enthusiasts are women. Now, we are realistically looking ahead to filming our 800th show and that’s exciting!”

“Ronnie is the creative one in our company,” stated Debbie Galletti. “He has taken our viewers on beautiful tours through places like Laughlin, Nevada; Canada; Sturgis South Dakota; the Blue Ridge Parkway and twice to the Playboy mansion for charity events.”   “Born To Ride” offers a look at the life and times of motorcycles and the people who ride them. Along the way, the company does more than its share of charity rallies. Recently, “Born To Ride” helped out with a rally and publicity for “Unity in the Community” which took place in Plant City, Florida.

Hulk Hogan and Bubba the Love Sponge were on hand to raffle a Chevrolet Camaro artistically painted with the famous red and yellow colors of the Hulkster. Seventy-thousand dollars was raised in a raffle for the car.   In an earnest and modest tone, Ronnie Galletti described his company’s involvement in such events, “Our part is to magnify other people’s greatness. We’re just blue collar folks who find a way to produce a TV show every week for biker enthusiasts.”   In addition to the website and the television programs, the husband-and-wife team publishes the “Born To Ride Magazine,” which has also grown in popularity.

“We put the magazine out for free. Business owners like Harley shops are more than happy to put copies on their shelves,” stated Debbie.   “It brings traffic into businesses because our viewers go into the stores to find our magazine. ‘Born To Ride Magazine’ is now distributed throughout the entire State of Florida.”   “We are very grateful to our loyal sponsors of ‘Born To Ride’ who have remained faithful during the good times as well as the lean times.”