Whitney Houston Is A Washed Up Burned Out Druggie 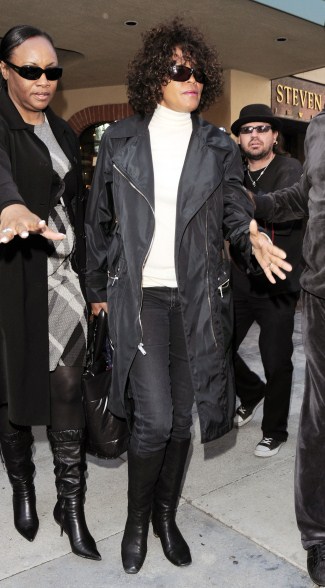 Want to scare children into staying straight – show them Whitney Houston – or better yet, let them listen to her try to sing! Houston is as finished as stamped out cigarette butt.   On her recent tour of Australia fans were booing and walking out of her shows complaining that she was singing off key, was out of breath, and sounded horrific.   She totally blew the Australian and Asian legs of her World Tour. Now in Europe she was forced to enter hospital for what she claims is allergies.   Give us as break – who do you know who winds up in hospital for allergies?   This burned out husk of a former star is attempting a world tour to reinvent herself – well it isn’t working.

First she put out an album – "I Look To You" – her first studio album in 7 years and is now doing the mandatory follow-up world tour.   But already her European leg is delayed by 1 to 2 months after her recent spell in a Paris hospital for a supposed respiratory tract infection. Already many are speculating that Whitney is back on the pipe again and her lack of stamina and lousy performances do not exactly breed confidence.

Here are some quotes from the Sydney Morning Herald: "At her Sydney concert during her rendition of acoustic and gospel songs she was unable to reach some of the higher notes. Some fans walked out. Others in the audience described the concert as "bizarre and weird", with Houston stopping and starting in the middle of songs. Coughing had punctuated her Brisbane performance."   Put this all together and place it on an ex-junkie and what do you have: R-E-L-A-P-S-E – relapse!   We hope we are wrong but fear we are right. Time will tell and tell us soon.   Photo: Flynet Pictures