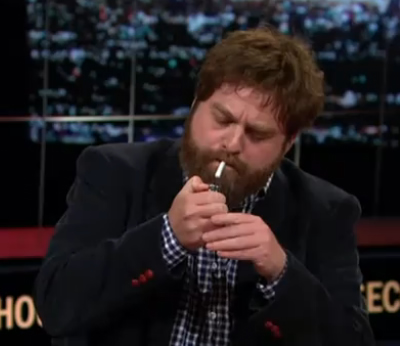 Actor Zach Galifianakis appeared on Real Time With Bill Maher last night to talk about the legalization of marijuana here in the U.S.

During the discussion, Zach pulled out a joint from his pocket and decided to smoke it. He said, “It’s a tricky thing politically to jump on that bandwagon because I think that maybe people still see it as taboo.”

He then offered the joint to another guest on the show, Margaret Hoover, who confirmed that it was, in fact, marijuana. No one else on the show wanted to take a hit from Zach’s doobie.

As he puffed away, he mocked the view of pot heads, saying, “Oh my God, look at those dragons!”

Too funny. Good for him. It’s not that big of a deal. Who would you like to see smoking a joint on television?