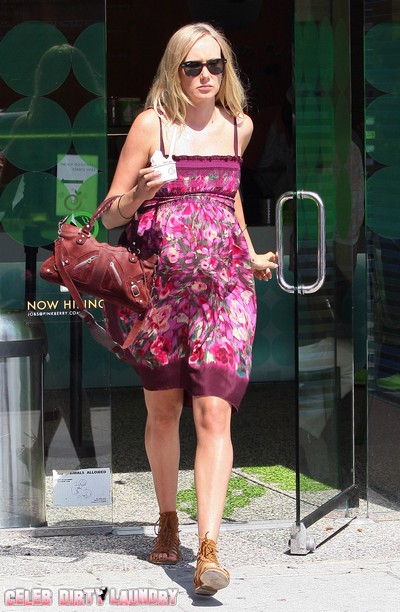 Rod Stewart‘s daughter, Kimberly Stewart, claims that Benicio Del Toro is “very involved” with their daughter, Delilah, although he and Kimberly are not in a relationship! How involved can Benicio actually be in Delilah’s daily life when he doesn’t live with the baby? It isn’t as though Delilah is old enough to have a relationship with anyone who is not part of her daily life – as she is only two months old.

The 32-year-old Kimberly gave birth to her only child two moths ago and she says that she is thoroughly enjoying her role as a parent. She insists Benicio is a good dad – what exactly can that mean when he and Kimberly are not living together?

She said: “I love being a mother. It’s the greatest experience of my life. It gets better every day. Delilah is starting to smile; she’s the perfect little angel. She definitely looks like her dad but she has my legs and eye colour.

“The whole family, including Benicio, was at the hospital and my mother and Benicio were in the delivery room with me. Benicio’s very involved; he and Delilah have a very special bond.”

She also admits she gave her child her unusual name based upon the song by Tom Jones.

She told Britain’s Hello! magazine: “I named her after the Tom Jones song, as I’d always loved it. Actually, Sophia had been at the top of the list and then I found out it was one of the most popular baby names, and that solidified Delilah, I thought it was unique.”

Kimberly is also expecting her half brother, eight-month-old Aiden – the offspring of her father Rod Stewart and wife Penny Lancaster – to become close to his niece.

She said: “Since they are only six months apart, I am counting on them being best friends.”