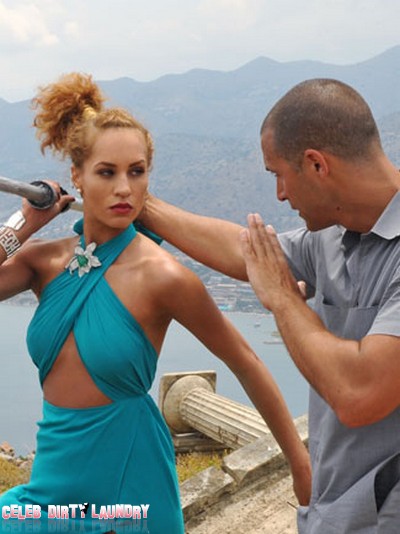 Tonight is the tenth episode of Tyra Bank’s America’s Next Top Model All-Stars and I am excited.   We are down to the final five and the competition is getting fierce.  Stay tuned as we cover the show with up-to-the-minute details. Last week Shannon, 27, from Franklin Ohio was eliminated.

Shannon went home primarily because she took a stand.  She told Mr. Jay that she was not wearing underwear in a photoshoot.  Mr. Jay tried to convince her that the underwear they chose for her looked like a bathing suit but Shannon was not willling to compromise.  At the end Shannon would not budge. She told them that’s who she is, and she’d rather give it all up and go home than do something she’s not comfortable with. If you missed last week’s episode you can read the official recap here!

Official Synopsis: THE ALL-STARS RE-CREATE ANCIENT OLYMPIC SPORTS – The women find out they will be judged by each other during a challenge, where one of the All-Stars is confronted about her insecurities. The women also get some time off to enjoy Greece and its night life. Nigel Barker photographs the models re-creating ancient Olympic sports. André Leon Tally and Nigel Barker join J. Alexander and Tyra Banks on the judges’ panel for the elimination.

Tonight’s Episode: The models get back home to their house and Dominique is happy she got best pictures.  Dominque says she is here for her children and she wants to go all the way.  Angelea wonders why she has been in the bottom two so often.  She thinks her pictures are better than Dominques.  Lisa thinks Alison does not have to do anything to make the judges like her but Lisa thinks Alison looks dead.  Lisa thinks she will win because she has the whole package.

The girls come to meet the judges and Ms. Jay is there.  He tells them they have been judges by the judges but now they are going too judged by their peers (each other).  As Laura says it is going to be a disaster.

The worst question he asks the girls is if they can pick one girl who should not not win America’s Next Top Model who would it be?

Laura – refuses to pick one person so does Alison and Lisa.  When Ms. Jay asks Dominque she says Angelea and the drama begins.

Angelea gets really upset because she does not want to hear what people have to say. Laura gets upset and tells Angelea she has talent and she just does not see it.  Everyone has to walk on eggshells with Angelea.  Laura tries to tell her she is not attacking her.  Angelea feels like everyone is attacking her.  Angelea walks out and calls them bitches and tells them to kiss her ass.  She tells them all she knows what they are trying to do.

The girls feel Angelea is not emotionally ready because she cannot accept what people have to say.  Ms. Jay comes over and Angelea tells him that the bitches are lying.  He tells her to come back inside.

Angelea comes back in with attitude and Mr. Jay asks her who does not deserve to win and she says no one.  She is totally pissed at everyone.

Ms. Jay tells Alison that she has been voted as the weakest with the least potential.  The girl who was voted as the strongest is Laura.  Ms. Jay tells them it is the most interesting challenge he has ever partiipated in.

The girls get up the next day and they are having a photoshoot.  They go to meet Mr. Jay he tells they they will be using fashion accessories  that recreates ancient Olympic sports.  They have to change things up and give the sport a fashion slant.  Nigel is the photographer today.

Dominique is given a javelin and she will have to make the sport looks fashionable.  Nigel feels her character was hidden in the shoot.   Leon thinks her leg is weak and not like an Olympian.

Allison is given a discus, Nigel tells her to imagine she is the goddess of wind.  Nigel was looking forward to shooting Allison but he felt she was awkward at the beginning of the site.  By the end of the site she got it together.  Tyra loves the action and awkwardness in the picture.

Lisa is a given hurdles, Nigel talks to her and Lisa tells him she is holding herself back, he tells her that is ridiculous and she starts again.  Mr. Jay felt like she jumped into the moment.  Everyone on the panel thinks her pictures are gorgeous.

Angelea is given a shot-put, Angelea did not understand what she had to do, there was no flow to it.  The shot works but most of the pictures were not good.  Leon likes the pictures.  Tyra feels like this was one of her deadest shot.

Runner Up For Best Photo – Allison

Come back at 9PM when we will be live blogging the show as it unfolds.  Make sure to refresh often to get up-to-the-minute results!