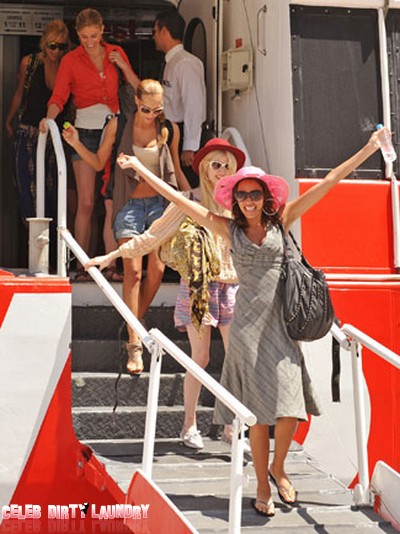 Tonight is the ninth episode of Tyra Bank’s America’s Next Top Model and I am excited.  tay tuned as we cover the show with up-to-the-minute details.  On last week’s episode Alexandria, 22, from Newport Beach, California was eliminated.  Alexandria just could not get it together last week and guest judge Game thought she looked fabulous but he never felt like she was too stiff.  The Game told Mr. Jay he has to put oil in the tin man.  The judges found her song was amazing but in the video she performed less than the song.

The other person in the bottom two last week was Angelea and she will have to raise her game tonight if she wants to stay in the competition.  If you missed last week’s episode you can read our official recap here!

Official Episode Synopsis: THE ALL-STARS HEAD TO GREECE – The women find out they are headed abroad to Greece and given the opportunity to collaborate with designer Michael Cinco on what could potentially be their final runway gown. At a photo shoot, one of the models is conflicted when they are asked to pose in underwear. André Leon Tally and Nigel Barker join guest judge photographer Nikos Papadopoulos and Tyra Banks on the judges’ panel for the elimination.

I am enjoying this season’s All Stars, are you?  Who are you rooting for?  My favorite model is Alison and I am hoping she wins this time!

Tonight’s recap:  Angelea is upset because she is in the bottom two again.  The girls congratulate Allison on her best photo.  Shannon is happy to be in the competition because she says she gets 1,000 e-mails a day from girls who says she is their role model.  Angelea says she wants to like Dominique but she thinks that she is fake and tries to be something that she is not.  Angelea is waiting for her to crack.

They get back to the apartment and Alison’s video is playing.Someone knocks on the door and it is Andre Leon Talley and he has brought a dinner for the girls to celebrate.  Two waiters come in carrying plates and one of them drops their plate and they fight.  Then Andre tells the girls they are on the way to Greece.  Andre tells them to go get packed and he will see them in Greece.

The girls are super excited to go to Greece.  The girls are in Athens and they meet Ms. Jay and they are told that they have to prepare a short 1 min speak on the way to their final destination which is Crete.   The girl who does best will win a gorgeous piece of jewellery from one of Greece’s most exclusive Jeweler.

The girls give their speeches when they get off the plane.  The girls get on a bus on the way to the Blue Palace Resort and Spa and it is breathtaking.  They walk down the stairs and they are greeted by Ms. Jay and he is going to tell them who the winner of the challenge is.  The challenge winner is Alison.  The owner of  Fanuraki Jeweler comes in and gives Alison a bracelet called Scarlett O’hara.

The girls are lounging in the house when Mr. Jay comes in.  Mr. Jay tells them for the first time in ANTM history each girl is going to sit down with a designer and design their gown for the runway show.  The theme is the Immortal Goddess.  Although the 6 girls will sit with the designer only 2 will wear the dresses in the final 2.

Laura walks up and she is really sick, but she won’t complain because she is blessed to be there.  The girls go meet Mr. Jay for their first photoshoot in Crete.  Mr. Jay tells the girls they will be posing in underwear and Shannon tells Mr. Jay she does not do underwear.  Mr. Jay tells her they can talk.   The photographer today is Nicolas Papadopoulous and he will be shooting the girls in a salad bowl in their underwear.

Dominique: Does a fabulous job, Mr. Jay tells her it is so sexy and so perfect.  Nigel likes the shot a lot. Leon loves the picture he thinks it is gorgeous.  Tyra loves it too.

Shannon: Mr. Jay tells Shannon that they have tried to choose underwear that looks like a bathing suit.  But she is not going to agree to it.  Shannon tells Mr. Jay underwear are for her husband.  Shannon thinks people will respect her because she is staying true to herself.  Shennon tells the judges that she decided years ago that she cannot pose in lingerie and she could not do the shoot.  The photographer tells them he would not book the girl if she had so many constraints.

Angelea: Mr. Jay feels she looks awkward sitting up and her core strength is week.  She finally starts to get it.  Nigel thinks she looks gorgeous.  The photographer said she made him feel awkward.

Laura: Is very sick.  Laura dove into the salad but the problem is she looked like a sexy little girl rather than a model.  Nigel finds the shot interesting.   Leon does not think the picture is good.

Alison: She was having a problem because the sun was getting into her eyes.  She was not happy with her performance.  Alison’s eyes are closed in the picture but the photographer likes her and thinks she can do nice pictures.

Lisa: The think her picture was strong and beautiful.  The picture is good but it does not always flow it is a bit forced.  They found her very predictable and it looked like she was modelling a bathing suit.

The girls are on their way to panel.  Alison is worried she feels she did not do a good job.  Laura is hoping that they managed to get a good picture of her.  While Shannon hopes that even though they have no picture of her they will admire her for staying true to her brand.

Runner up For Best Picture:  Alison

ELIMINATED: SHANNON  She was not eliminated because she did not do the photoshoot but because she never won a challenge nor did she ever win best photo.  So adding it all together is how they made their decision.