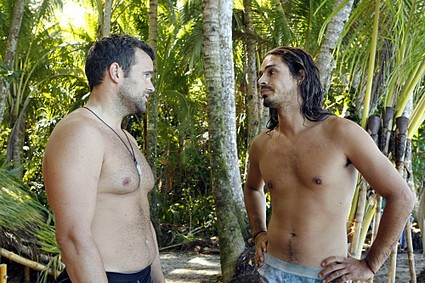 Tonight is the third of the episode of Survivor: South Pacific and the episode is called ‘Reap What You Sow’  If you missed last week’s show read our official recap here!  The first duel on Redemption Island takes place. Back at camp one tribe member lies about finding a hidden immunity idol trying to avoid being voted out. 16 contestants left, who will be voted out tonight?

Christine blames Coach solely for voting her out and sending her to Redemption Island. Meanwhile, Brandon says he was 100% sure that Mikayla was getting voted out and feels bad about Christine being the one.

Tree mail arrives and both tribes get to choose two people each to go witness the battle on Redemption Island. Coach and Stacey get to witness for Upolo, Ozzy and Elyse for Savaii – the battle between Semhar and Christine. Both girls have to hold a pole balancing a totem statue, it’s an endurance competition, they need to concentrate when they have to add another section of the pole. The beautiful thing about Redemption Island, it is a second chance to get back in the game. Another section of the pole has to be added. Semhar loses her grip, Christine seizes her moment, she awaits her next opponent on Redemption Island.

Brandon is still really upset that Christine got voted out, he’s down at the beach and in what I call a moment of insanity, he admits that he is Russell Hantz’s nephew. He tells everyone he doesn’t want to be like his uncle, he doesn’t want to lie but his lying about it in the first place takes a negative turn with the tribe. Coach is questioning his alliance a little bit with Brandon, the whole ‘Hantz’ thing has put a bad taste in his mouth.

At Savaii, Mark is feeling threatened being considerably older than the rest of the group. Ozzy tells Keith that he found the idol and he runs right to Whitney.

Mikayla faces down Brandon at Opolo because he voted to get rid of her and his dislike for her is really showing. Brandon has an outburst in front of the whole tribe and tries to lay it on the line that he is not the only one that doesn’t like her and he comes off as a loose cannon.

It’s time for the Immunity Challenge. One person from each tribe have to race in the water to fetch a bags, the rest of the tribe have to turn a big wheel which brings the tribe member back to the beach. Once they are down, with grappling hooks they now have to retrieve banners, once all five are retrieved they roll down the banners and the first team to have them all down is the winner. Opolu wins immunity and in addition they were playing for reward, some luxury food items that all agree are well worth playing for.

At Savaii the consensus seems to be voting out either Papa Bear (Mark) or Cochran, but they are leaning towards Papa Bear. Papa Bear is told that Cochran will be voted out, but he doesn’t believe them. He sprints through the woods straight for the beach and Elyse catches him digging in the sand looking for the idol. Papa Bear pretends that he finds it, to try and through the tribe off so they vote out Cochran instead. Meanwhile Ozzy is laughing at the whole situation because he is the one that actually has the idol and doesn’t want to tell anyone else.

Elyse is the first one to cast her vote, then everyone else follows and nobody gives up the immunity idol when Jeff Probst asks. Third person voted out of Survivor South Pacific, Papa Bear – his scheme didn’t work.