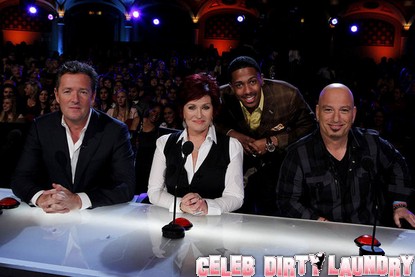 Prepare to see more hopeful acts in tonight’s episode 2 of America’s Got Talent.  Tonight we begin with the Seattle auditions.  If you missed the premiere last week, you can catch our recap HERE.   Our recap tonight is brought to us by Rosie over at Fit Fab Celeb.  So without  further ado lets start tonight’s show.

First up tonight is 23-year old, Melissa Villasenor, a celebrity impressionist.  She got me when she did Kathy Griffin, she was spot on. Sharon said she doesn’t think Melissa will be working in retail any longer. Pierce said it was sensational. Howie said it was right one, she’s a star and she’s adorable. A great start for the night, Melissa is going to Vegas.

23-year old twins, Andrew and Charles singing My Girl. Pierce gives an X buzzer and basically tells them they suck. Sharon politely tells them that they can’t sing. The twins go on to call Howie a hater and invites him on stage to sing. Both Sharon and Pierce give Howie three X buzzers.

The show goes on to show us other acts that received the golden Three X Buzzers; an opera singing married couple, a Drag Queens: The Rice Rockets and Mr. Mystic the rapping musician.

69- year old Anita McCoy who uses a hullahoop and shockingly does the splits. Unfortunately her timing was off and judges were not impressed, she gets three X buzzers.

Zuma Zuma, acrobats from Kenya. Wow, these guys were better than any professional cheerleaders that I have ever seen, fantastic. Everyone loved the energy and couldn’t believe they performed with no mats. Three yes votes, they are going to Vegas.

The next group are teenage best friends, Pop Lyfe. Howie called them original and unique, he loved them. Sharon said she admired what they did, great personality and great voice. Pierce liked the girl and lead singer, but he didn’t think she needed the band. Howie and Sharon give them a yes to Vegas and Pierce a NO.

Next up is Mauricio Herrerra, a showman from Costa Rico. First X buzzer is from Pierce. The guy looks like Ricky Martin on crack! Pierce said it was horrendous, disco nonsense. Howie said it was funny and he wants to see him in Vegas and begs Sharon to give him a yes. Sharon gives in, Mr. La Vida Loca is off to Vegas.

Prankster Howie is at it again – he moves a huge Pepsi machine in front of Pierce’s door so he can’t get out, lol.

56-year old Carlton Baltimore ‘The Paper Horn Man’. Of course, Pierce is the first on to give him an X buzzer and even leans over and presses Sharon’s X buzzer – then walks off the judging panel. Sharon gives him a no – then, while waiting for Pierce to return, host Nick Cannon and The Paper Horn Man perform a duet. Pierce gives him a NO, poor Howie is all by himself on this one and no ticket for Vegas.

Come back tomorrow night for a recap of a special 2-hour episode with some of the most dangerous acts.