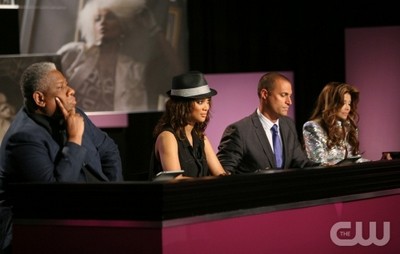 Tonight is the fifth episode of America’s Next Top Model.  Last week Camille, 33, from The Bronx, New York went home.  If you missed last week’s episode you can read our official recap here!  This week the guest judge is Latoya Jackson.

Tonight LaToya Jackson guest stars as judge and mentor, the models wear fashions from Kardashian Kollection in a runway challenge with Kim, Kourtney and Khloe Kardashian in attendance at the Santa Monica Pier. At the photo shoot, the girls are given guidance by LaToya Jackson. The stakes are raised when the women must exit a moving carousel before hitting the runway.

Angelea is thrilled that she went from the bottom two to the top last week and if the other girls hate her, oh well. TYRA mail comes “What Comes Around Goes Around”.

Stress is getting to all the girls although Bianca and Lisa get into a cat fight – these two personalities just don’t mix. The girls finally get out of the house and finally get to clear the air. At Santa Monica Pier the girls find Miss J in a Fisherman’s outfit who explains the challenge. The girls are in hair and makeup, Miss J walks in with Kim, Kourtney and Khloe who give them a little advice.

Miss J addressed Bianca and told her that her bad attitude really showed today and she didn’t deliver. All of sudden Bianca starts melting down in front of the girls. Everyone else in the house pretty much want her to leave the house.

It is time for the next challenge, each model has to dress like Micheal Jackson and LaToya walks in to mentor them. Bianca is first up, she is dressed like Micheal in Bad. Bre is up next, wearing the famous white glove. Alexandra and Angelea don’t do very good, they look like neanderthals. The rest of the girls bring it home, but Lisa brings a lot of energy to the shoot and out does all the girls.

At the judges panel, LaToya Jackson is setting in as guest judge.  Tonight they did something they never did before on Top Model, the guest judge, LaToya picked the best to worse. The first name is Laura for best photo. We are now down to the last two girls, Angelea and Lisa because they had the two weakest photos. This is not the first time that Angelea is in the bottom two. Although Tyra liked Lisa’s photo, the others didn’t. LaToya tells the girls that nobody is going home this week because her brother was all about love and all the girls showed their love.

Thanks to Rosie over at Fit Fab Celeb for the recap!