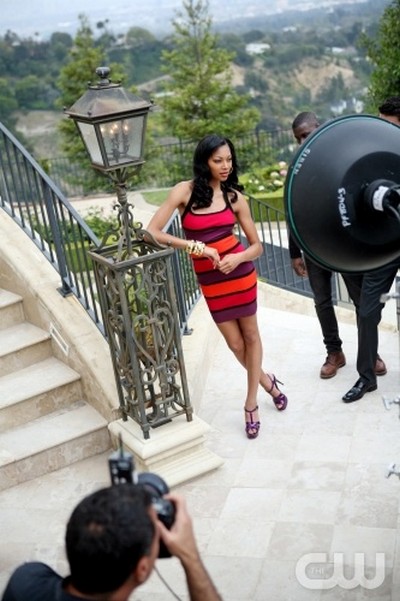 Last week on America’s Next Top Model Isis, 25, from Prince George’s County, Maryland went home.  It is really too bad I liked her she was a great model and had some great pics!  If you missed last week’s episode read our official recap here!  This week on the show the guest judge is Anthony Zuiker CSI creator.

Here’s your RECAP brought to you by Rosie at Fit Fab Celeb.  Allison is really happy that she had number one photo last week. Angela is still upset that she was the last woman standing and is going to take Nigel’s advice to heart this week. Lisa admits that she did drink in Cycle 5 and realizes she needs to have a hard grip on reality this time.

Mail arrives and all the girls are excited that they got stuff from home. Camille received a box full of bills because there is no money coming in from anywhere for her.  Kayla is not feeling well, she feels really dizzy and admits that she took a lot of meds. She starts hyperventilating and they have to call for medics as she starts to throw up.  The girls are all frightened as an ambulance arrives.

Kayla is gone to the hospital and all the girls are very scared about what is wrong with her.   A little later, Kayla shows up at the door, looking amazingly OK.   She tells everyone that she had cardiac arrhythmia, which could have been caused by stress.

Tyra Mail: They girls have to go to stage 35 and meet with Mr. Jay who tells them that they are going to do a screen test for a role on CSI. The girls are brought into autopsy room B and Anthony Zuiker, Creator and Executive Producer of the show is going to help judge. The winner will be on an episode this fall and have 30 minutes to memorize a scene.

Basically most of the girls suck, except for two; Angelea and Zuiker tells her right off that she is good. Bre also nails it, that makes two. Lisa even gets a second chance and she was the worst of the day, did not learn the script at all, not the Lisa we are used to.

Mr. Jay gives the results, Bre wins and Angelea’s face drops about 10 feet, she is pissed. Bre will be featured on an upcoming episode of CSI.

TYRA MAIL: Tyra gives them a note “When you are in love you have to express yourself”. The girls arrive for their next photo shoot, a mansion is the back drop. Lisa Gavales, the Chief Marketing Officer for Express. The girls have to get into character as a girlfriend, socialite or flirt with some gorgeous male models.

Back at the house Camille is worried that she will be let go because she is the oldest, meanwhile Kayla is still rambling on about her being ill the other night – can someone tell this girl that she just had a panic attack?

It’s time to find out who will be sent packing. The judges: André Leon Tally, Nigel Barker, Anthony Zuiker and Tyra Bank are ready to deliver. Laura, Kalya, Domenique, Bre, Allison, Angelique did well with their best shots. Alexandria, Camille , Lisa, Bianca and Shannon did not impress.

Time to deliberate, somebody is going home and they have reached a decision. Tyra only has ten photos that represent one of who is going to be America’s Next Top Model. The first name is Angelique, from the bottom two last week to the top this week.

Runner up for best photo this week goes to Domenique. All the other girls get their photos with the last two standing, Lisa, an out of control girl, and Camille, a girl who is in control.  Only one photo of the last person who is still in running, it is Lisa.