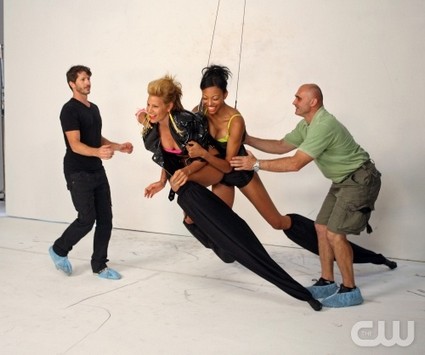 Last week on America’s Next Top Model Sheena, 24, from Honolulu, Hawaii was sent home.  If you missed last week’s episode read our official recap here! This week on the show the competition is fierce as the All-Stars meet reality star Kristin Cavallari, who will be a judge for tonight’s show.  Kristen tells them what it takes to be a celebrity personality in Hollywood. The women are tested on their interview skills when they head to entertainment news magazine “EXTRA” to meet with host Mario Lopez. During a photo shoot, the women are paired together and must handle the difficult challenge of modeling on stilts.

Now without further ado – here is tonight’s recap of episode 3.   The girls are back at the house and Lisa and Allison are talking.  Allison is having trouble making friends.   Allison says she knows she is smart LOL hmm.  Someone comes to the house and it is reality star Kristin Cavallari.  She came over to say hello to the girls and answering some of their questions.

They get Tyra mail and the girls think they are doing interviews.  They go to The Grove and Nigel Barker is there and he tells them The Grove is where the television show Extra is filmed.  The girls are going to be interviewed in groups by the host of the Mario Lopez.

They split into two team.  The winner of the challenge is safe in elimination this week.  Team 1 – Isis, Angelea, Lisa, Alexandria, Laura, Dominique – Team 2 – Allison, Bianca, Kayla, Camille, Shannon, Bre WINNER TEAM 2, they will be safe from elimination.   Allison was the overall winner and she will come back and be a correspondent on Extra.

The girls get back to the house and there is Tyra mails and it says “My what long legs you have” the girls are afraid there might be spiders crawling on them.  They get to the studio and there are people dancing on stilts.

Jay Manuel comes in and tells them the photo shoot will be them on stilts.  The girls will be paired one girl from the winning team and one from the losing team of the challenge.  The look they are going for in the shoot is Pop 80’s.

Dominque – is hell bent on keeping the model face. She makes the picture the best. Kayla – is not great in the pic. She is not spontaneous  The photo does not stand out but Dominique dominates.

Lisa – tried all kind of poses and did a great job. Great pic!  Bianca – is having a meltdown because she is afraid of heights.  Jay Manuel thinks Bianca looks like she is about to throw up.  She did not deliver. The judges think they look great together.

Camille – she felt like it was carnival. This was the judges least favorite of all the photos.  Isis – she did not bring fun to the shoot. Isis did not have enough emotion.  The judges do not feel the photo is that exciting.

Allison – Jay loves what she is doing.  She is doing such a good job no one was noticing Angelea. She looks great  Angelea – is having problems.  She did not do a great job. Allison looks stronger in the picture.

Bre. the judges don’t love her photo. and Laura –  they nailed it.  Laura has made it a fashion shot.  They are both good in the photo.

Shannon – she was the trustworthy one.  They would like to see a little more trust.  She does not make the picture  Alexandria – the photographer though she had a flair for drama.  The judges love the girls photo.

The girls are going to elimination but only six are up for elimination and six are safe already.

Runner up for best photo – Bianca

Girls Who Are Not Safe

Runner up for best photo – Lisa