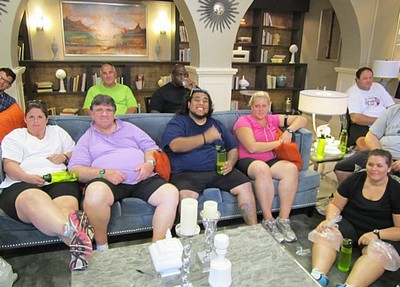 The Biggest Loser is back tonight with the second episode of the 12th season. Last week we saw Patrick eliminated.  This week, the contestants are surprised by three special guests – past season contestants Hannah Curlee, Adam Hurtado and Marci Crozier, who each visit and inspire the team that represents his or her respective age group.

Tonight’s recap:  The show starts with Ramon upset because he had to vote out his best friend Ramon.  Ramon feels like he betrayed his best friend.   Ramon says that Patrick leaving makes him want to step up and lead.

Bob is meeting with the Black Team and introduces Hannah who is from Biggest Loser Season 11 where she lost 120 lbs.   She is talking to the team about her journey.  The team is going to go into the kitchen with her so she can teach them how to eat when they go home.

Over with Dolvett and the Red Team and he introduces them to Adam from Biggest Loser  Season 10 where he lost 182 lbs.  He gives the team a pep talk and he is going to work-out with them and teach them to know their limits and when they need their teammates.  Ramon takes off as the leader on the work-out and carries the weight for the team in the five-mile walk.

Anna introduces the Blue Team to the special guest Marcy from Biggest Loser Season 11 where she lost 86 lbs.  She is exercising with them in the sad to inspire them and to teach them not to give up.

The team’s head back to the ranch for the workout the Black Team gets help from guest Hannah.  Bob is really worried because they have won three weight-ins in a row and he feels winning a fourth time will be difficult.

The Blue Team and Anna are at their workout doing some intensive cardio.  Mike (Coach) is approaching all the workouts full-out and Anna compliments his dedication.  Bonnie is proud of herself she has made huge improvements in her workouts.

Antone from the black team is starting to miss his family and feels he has to talk to them.  He is talking to the other team members and they are encouraging them and telling him he has to do this for his family.

Dolvett takes Courtney out to the basketball court because he found out that she gave up on sports.  Dolvett wants to remind her why she loved sports.

It is challenge time and it is a perfect day but one day they will be going back to the real world and have to face difficult conditions.  Today’s challenge  the players are off to a wild weather challenge in which they have to race while battling the elements – including wind, rain and snow – to win coveted letters from home.

The Black Team wins the challenge followed closely but the Red Team.  The Blue Team is far behind but they are not giving up, they are working together.  The rest of the teams cheer them on!

Alison gives the teams good news,  not only does the black team get to read their letters, but everyone does.  The Black Team receives an unexpected and very emotional bonus prize, they get to video chat with their family.

Last chance work-out:  Anna brings the contestant over to the tennis court to do tennis drills and conditioning.   Anna has spent her life on the tennis court so she knows what they have to do.  She is trying to make the Blue Team believe how much they can actually do.  Coach is confident the Blue Team will not lose anyone in the weight in today.

Later, trainer Bob Harper takes his team to the pool for last chance workouts, Joe tries to overcome his fear of the water.  He says he almost drowned twice in his life.

Trainer Dolvett Quince pushes his team to new heights in the gym at the last chance workout.  Dolvett does not want to lose anymore!

In Between Team Results

The Blue Team loses the weigh-in and Bonnie is safe because she had the highest percentage weight loss.  That leaves Bonnie to decide who goes home.  Bonnie decides to send Coach Mike Home.