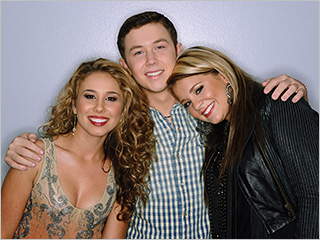 Tonight on American Idol they are down to three contestants: Lauren Alaina; Haley Reinhart and Scotty McCreery.  The contestants will perform and American will decide which two make it to the finals.  As in the American Idol tradition when they are down to the final three each each contestant go to their hometowns.  Scott traveled to his hometown Garner, North Carolina, Lauren visited her hometown Rosville, GA and Haley visited her hometown Wheeling and they all received a heroes welcome.

Tonight on Idol it will be the three songs choices the producers pick night and the contestants will also get the chance to impress with a personal song choice and they can choose any song they want.

Beyoncé is the mentor tonight and she feels America has a difficult decision tonight.  The intensely-anticipated video for “Run The World (Girls),” the lead single from Beyoncé’s upcoming new album, will premiere on American Idol

Round One  – Contestants Choice

Scotty McCreery is up first and he is singing a Amazed by Lonestar. I am not a huge country fan but I thought he sounded good.

Judges comments: Steven said “you get better and better, it was what I was waiting for” Jennfer said, “it is great to see you over the weeks and how much you have grown week after week.  You’ve grown so much over the season” Randy said, “it was a great song choice, you are picking smart songs for you, there were a few pitchy spots, but it was great”

Lauren Alaina is singing ‘She’s a wild one’ by Faith Hill.  She was okay but not very impressive.  I am shocked James went home and she stayed.

Judges comments: Jennifer said, “Lauren our little baby, you come out and attack and that is what you have to do.  That was very good.” Randy said,  “he loves the advice Beyoncé gave her, he loves seeing her fun.  You have to have fearlessness. When you let yourself go you are the best. “ Steven said, “I love how you were singing, you are so ready for American to be all over you.”

Haley Reinhart is singing ‘What is and What should Never be‘ by Led Zeppelin.  Hailey had her father playing on stage with her tonight.  During the song Hailey took a fall and I am thinking it was Led Zeppelin kicking her – cause no should sing Led Zeppelin.  Apparently the judges and I were watching a different performance because they thought it was the best of Round 1 and I would say Scotty’s performance was!

Judges comments: Randy said, “This is what it is all about, this girl is slaying it, you chose a song that is not for the week at heart, crazy!” Steven said, “Hailey did you fall for me?  That was superb” Jennifer said, “Everyone falls,  it as a tough song, you sang it great, a good round for you”

Scotty McCreery is up first and he is singing “ Are you gonna Kiss Me Or Not” By Thomas Square. He was fabulous and only 16!  This guy should definitely win it!

Judges comments: Steve said, “Scotty, Scotty, I never heard you deliver a song like that.  Beautiful!”  Jennifer said, “There were so many moments in there I loved so much.  You were in the zone, try to capture that all the time.” Randy said, “Look, Jimmy picked a great song for you, I felt like Garth is a great performer, you were that tonight, you were at his level. Scotty is in it to win it”

Lauren Alaina is singing ‘If I die Young‘ by The Band Perry. This was better than her last song.  The first part of the song was good but when she got to the middle she missed a few notes, she seemed to get distracted for a moment.

Judges comments: Jennifer said, ‘You Lauren have the most beautiful tone of our finalists.  You had a very honest moment in that song, but that is okay. It was beautiful’ Randy said, ‘You know what was great your realized right away when you did not hit the modulation right, you fixed it right away.  It was a good song choice.’ Stephen said, ‘I loved the song, you have a beautiful voice and you did it again.’

Haley Reinhart is singing Rhiannon by Stevie Nicks.  I cannot believe he picked this song for her.  ughh one of my favorite Stevie Nicks and she destroyed it.  Sadly again the judges did not agree with me.

Judges comments: Randy said, “You cracked me up you are so funny.  I think you did a good job with it, your pitch was perfect. “ Steve said, “you sang that song so beautiful and I know why I fell in love with Steve Nicks’ Jennifer said, “It was a beautiful moment,  it was a nice contrast to what you did earlier”

Randy and Jennifer picked Scotty as the winner of Round 3 and Steven picked Lauren.

Scotty McCreery singing ‘She believes in me’ by Kenny Rogers.  My grandmother plays this song all the time and I thought Scotty did the song perfectly!

Judges comments: Steven said, ‘I do believe that is the first big chorus we have heard you sing and you put it over the top for me’  Jennifer said, ‘We wanted to see if you could hit that chorus and you showed us’  Randy said, ‘Seeing you believe that you  could do that but I am telling you – you hit the chorus perfect’  Nicely done’

Lauren Alaina is sing ‘I Hope You Can Dance’ by Lee Ann Womack.  Her best song of the evening, she sounds very very good.  A good syle for her!

Judges comments: Jennifer said, ‘you see that, that does not lie (audience clapping), you gave me goosebumps from head to toe.’ Randy said, ‘you sang the song you were great, you are in it to win it. ‘ Steven said, ‘you came out like you were on the Grand Ole Opry.  Stunning!  The song was good’

Judges comments: Randy said, ‘American has it work cut out of it.  Sometimes a little problem with the rhythm but I loved it.’ Steven said, “it was amazing, incredible.’ Jennifer said, ‘it was a really good job.  No one can match you, in the middle parts a problem but the choruses were strong.’

Don’t forget to join us tomorrow for the results and find out who the final 2 are.  My vote would be Hailey to go home.  I still cannot get over the face that she stayed and James went last week!!  What do you think?  Who should get the boot??