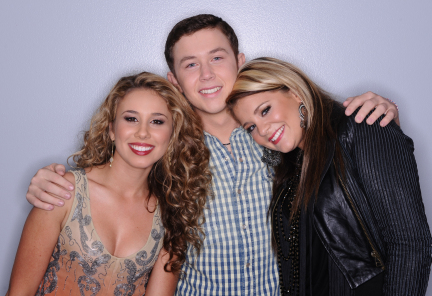 Welcome to our American Idol Result Show recap.  American Idol will be down to the top two contenders by the time the show is over.   The contestants who remain are Scotty McCreery, Lauren Alaina and Haley Reinhart.  If you missed last night’s show catch our recap here.  Over 90 million votes came in last night, 15 million more than last year’s finale.  Tonight’s results show will determine who will be performing for your American Idol 2011 finale and who will be going home.

Even before Ryan Seacrest reveals the results we can tell you what our poll today predicted.  If the poll is correct it seems like Scotty McCreery will be in the final 2 only 10 % of our viewers thought he was going home.  While in our pole Lauren Alaina and Haley Reinhart are nose to nose.   Lauren has 43.96 and Hailey 45.36.    So will Hailey’s fans save her or will she be the contestant going home tonight.  We will know soon who will be the final two.

We are live blogging so come back often and we will be updating you with the American Idol results as they are announced.  I am rooting for Scotty!  How about you?

After the national wide vote the first person going through to the finals is Scotty McCreery.  The person who will compete against Scotty is Lauren Alaina.