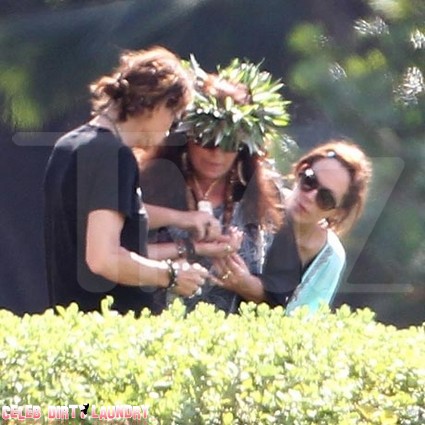 American Idol judge Steven Tyler, 63, gave his lady love Erin Brody a whopping five carat engagement ring when he popped the question in Hawaii.  But hold the presses TMZ is reporting that the two were spotted having a sort of religious ceremony yesterday December 30th, 2011 in Maui.  Two two were casually dressed during the ceremony.

TMZ has the scoop and the pics on the happenings:  In the photos, Tyler and his fiancée Erin Brady can be seen in Maui yesterday, partaking in some kind of ceremony with a woman … who we’re told is a local religious official.

Rumor has it that Steven’s family was not pleased about his engagement to Erin because he did not inform them about it.  Steve and Erin have been together five years but that is not enough to make the family happy.  Just imagine how upset they are going to be if he got married!

Could the photos actually be of their wedding?  Head over to TMZ to see them.  If it is true congratulations to Steven and Erin!!