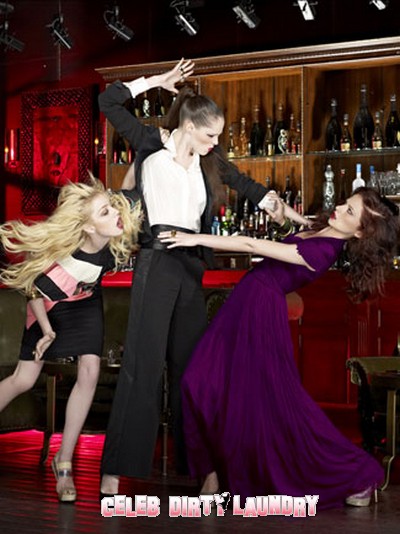 Last week on America’s Next Top Model no one was sent home. The guest judge was Latoya Jackson and she told the contestants that because her brother was all about love and all the girls showed their love no one would go home.  If you missed last week’s episode read our official recap here!

Tonight Coco Rocha guests stars as a judge and a mentor.  At the photo shoot, the models find out they will be posing in pairs alongside supermodel Coco Rocha.

The show opens with Angelea complaining because she was in the bottom two again.  She is glad that Latoya saved her and she is going to remain focused from now on.  Tension is high in the house.

Laura is thrilled she got best photo because you are honoring Michael Jackson.   A lot of the contestants are feeling the pressure in the house, personalities are clashing.

The girls get Tyra mail which says “If you hear about anything, you won’t drop the ball.”   They are going to have a Charity Challenge and Nigel Baker is the photographer.  The girls are going to get divided into two teams and they are going to play flag football.  Because there were not enough people they brought back some of the eliminated contestants.  Much to the girls excitement they bring in  professional football players to play with them.

During the challenge, the all-stars pause for photos and the competition is fierce.  The winning team will win $5000 to split with their charity.  The player/contestant with the best photo today will get some bling and be featured on Tyra’s website.  Lisa scores the first touchdown for the Red Team.  The Blue Team won the game.

There can be only one winner and the most valuable winner is Kayla and she is going to appear on Tyra’s website TypeF.com, get some bling and at the photoshoot be styled by Andre Leon.

The girls are on there way to their next photoshoot.  The girls arrive at the photoshoot and Jay Manuel tells them for today’s photoshoot they are going to have a real old fashion bitch fight.  They are  told they will model alongside with Coco Rocha.  To make the shoot more difficult they will be shooting in pairs with Coco.  The photographer for today is Douglas Friedman.

Bianca & Shannon – The girls did exactly what they were suppose to do.  Bianca looks exquisite.  Shannon was a bit upstaged by Bianca.  The judges feel like the photo was all about Bianca and not Shannon.

Alison & Kayla – The shoot was embarrassing to look at.  Alison and Kayla looked like amateurs.  Alison was really having a hard time with it.  The judges thought the three of them were working in perfect harmony.  Much different than what Jay Manuel thought!

Angelea & Laura – Angelea is overwhelmed today at the photoshoot and is totally intimidated by Coco.  In the middle of the shoot she starts crying and leaves the set and Laura cannot figure out why.  Jay goes out to talk to her and she tells him she really is trying.  Jay tries to give her confidence.  After she came back it was all working.  The judges love Angelea’s face.  Tyra thinks Laura could have done better with the picture.  Coco was impressed with Angelea because she returned to the set and acted like a professional.

Alexandria & Bre – Bre is crazy in the photoshoot.  Coco found her shocking and had problem posing.   Coco felt Bre was over the top and they feel her photo was not high fashion but slapstick.  The judges feel like Bre was boring and Alexandria looked too old in the picture.

Lisa & Dominique – they were by far the perfect trio.  The judges think they are rocking the picture.  A fabulous picture!  The girls knew exactly what they were doing.

Tyra Mail – they are going to meet with the judges!