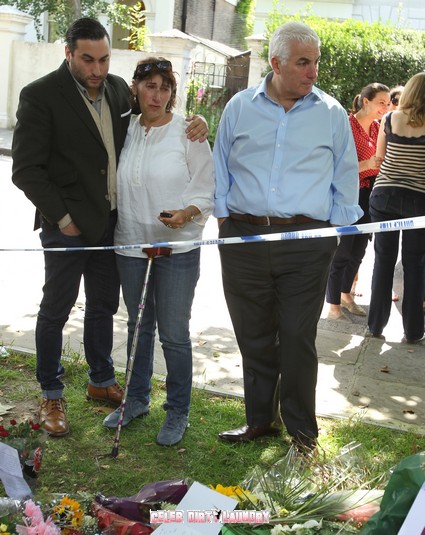 Amy Winehouse‘s mom and dad paid an emotional visit to the informal memorial that has sprung up outside the late singer’s home in London’s Borough of Camden.

Amy’s parents. who are divorced, supported each other as they visited the coroner’s court to formally identify Amy’s body.  Amy’s mother Janis broke down in tears after leaving the coroner’s court and sought comfort from ex-husband Mitch and her son, Amy’s brother Alex.

The family then made their way to view the growing number of tributes that have been left by fans who were devastated to learn of the singer’s tragic death on Saturday – she was aged just 27.

The family displayed an overwhelming resolve as they read the card, poems, notes and tributes left by fans and sought comfort from each other.

Speaking to reporters at the memorial site Mitch said: ‘I know a lot of you, we’ve been together for five, six years, I know you’ve got a job to do. I’m glad you’re all here anyway.  And you people in the street, I can’t tell you what this means to us – it really is making this a lot easier for us.’

Amy’s mother Janis told yesterday how she saw her daughter the day before she died, describing her as ‘out of it’.   She said: ‘Her passing so suddenly still hasn’t hit me, adding that Amy told her she loved her.  ‘They are the words I will always treasure,’ she said. I’m glad I saw her when I did.’

Miss Winehouse’s father Mitch, 60, flew to London from New York yesterday, where he had been due to perform at a series of jazz gigs. Looking stony faced, the former black cab driver landed at Heathrow Airport at 6.30am.

A close friend said: ‘Mitch is being stoic for the family, but he is beating himself up, he was always by Amy’s side.’

Mr Winehouse said: ‘This isn’t real. I’m completely devastated. I’m coming home. I have to be with Amy. I can’t crack up for her sake. My family need me.’

In a statement, the singer’s family said: ‘Our family has been left bereft by the loss of Amy, a wonderful daughter, sister, niece. She leaves a gaping hole in our lives. We are coming together to remember her and we would appreciate some privacy and space at this terrible time.’

Click on the thumbnails below to enlarge 16 more pictures!