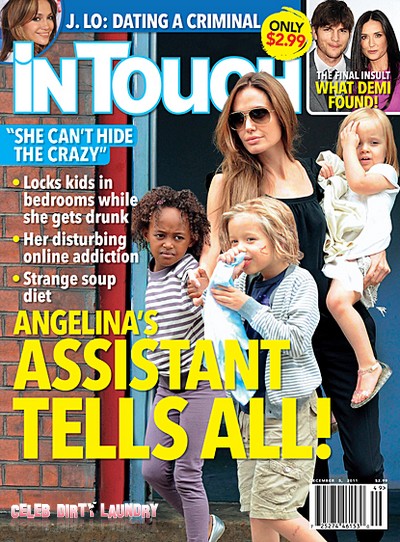 The current issue of In Touch magazine has the cover story ‘Angelina Jolie’s Assistant tells All!’  The magazine suggests that her assistant Ms. Charlotiaux says that Angelina Jolie cannot hide how crazy she is.   They report that Angelina drinks too much and she locks her six children in their bedrooms while she gets sloppy drink.    Also oh, no Angelina has an on-line addiction.   They go on to claim that Angelina who the tabloids have been claiming for years is anorexic, actually has a strange soup diet.

In Touch has more: Angelina Jolie’s Assistant Tells All! It’s Angelina Jolie’s worst nightmare. Her former assistant Ana Charlotiaux — who was privy to the actress’ most private correspondences — has filed a wrongful dismissal suit against Angelina and her partner, Brad Pitt. And if the case goes to court, it’s bound to shed a bright light on the bizarre personal habits that Angelina has kept safely hidden for years. But now, another assistant and staffers are coming forward to share their twisted tales of working for the Jolie-Pitts with In Touch.

The assistant claims that the Jolie-Pitts fired her because she was sick and took some time off work.   Ms. Charlotiaux, 45, is suing the management of the Hollywood stars’ $35 million country estate in the south of France, where she worked until February last year. Ms. Charlotiaux was hired to deal with telephone and email enquiries at Chateau Miraval, near Brignoles, in the Var-Provence region, in 2008.

Emmanuel Ludot, the lawyer for Ms. Charlotiaux pled ‘unfair dismissal’ before a panel of Prud’hommes – so called ‘Wise Men’ who rule on employment disputes in France – and asked that Ms. Charlotiaux receive about $80,000 in compensation.

To find out more details pick up the current issue of In Touch!