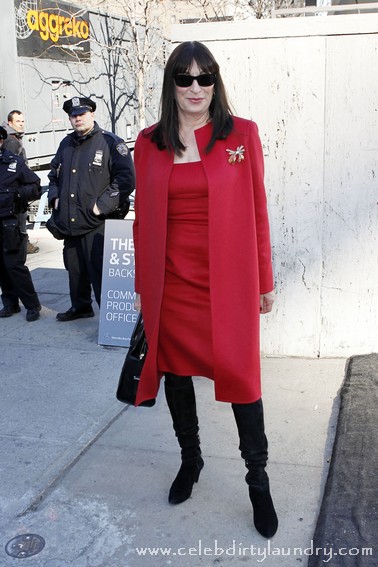 59 year old Anjelica Huston’s new memoirs  will admit she is still in love with Jack Nicholson and intimate details of their wild relationship.  She will also talk about for the first time details of what happened the night Roman Polanski raped a 13 year old child in Nicholson’s Hollywood home in 1977.

The National Enquirer has the scoop:

“Breaking up with Jack was more brutal for Anjelica than the death of any relative or friend.  Losing him devastated her and she never really recovered.  “Their life together was Hollywood at its most hedonistic – and drugs were a big part of it.”

In 1977, Anjelica found herself at the center of one of Hollywood’s biggest scandals when good friend Roman Polanski, then 43, arrived at Jack’s Mulholland Drive house with 13-year-old Samantha Geimer.

He allegedly plied the young girl with champagne and drugs before having sex with her.  “Anjelica was there!  “She knows ALL the details and plans to reveal them in the book.”

Anjelica was arrested the day after the rape happened but she was released after she agreed to testify against Polaski but that never happened because he fled the country.   I cannot wait until the story comes out I am sure it will be very interesting and I will buying a copy.  How about you?