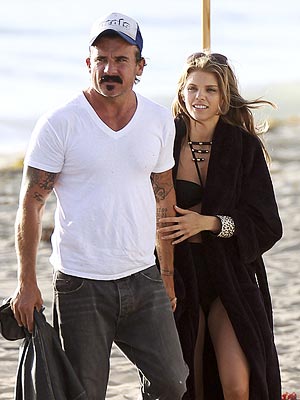 AnnaLynne McCord, 23, known for her role in Beverly Hills 90210, has been dating Prison Break star Dominic Purcell, 41, according to JustJared.com.  The two have managed to fly under the radar for several months but were seen late this week with their arms wrapped around each other in Westwood, Calif.

I guess things are truly over then with AnnaLynne’s former beau, Twilight hunk Kellan Lutz.  It’s a sad, sad day.

Dom visited AnnaLynne on set this week, and at one point, the actress ‘jumped into his arms, giving him a passionate kiss as he groped her’, according to Us Weekly.  Not shy are they?

The two met while co-starring in 2012’s Officer Down, and despite their 18-year age difference, AnnaLynne has made it clear what she looks for in a man when she opened up to Us back in June:

“I look for a man, not a little boy,” she told Us in June. “I like honesty and strength. I like confidence, and talent, and yeah, I’m really happy right now!”

Prior to dating AnnaLynne, Dom was married to Rebecca Williamson before they split in 2007.