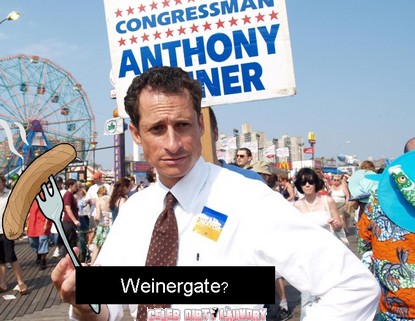 Top leaders in the Democratic party called on Congressman Anthony Weiner to resign because of his recent scandals.   Weiner has said he will NOT resign but he will take a leave of absence and left this morning to get therapy to make him a better husband and a healthier person.   Maybe they can teach him not to tweet pictures of his wiener :-)

TMZ has more: Weiner’s rep released a statement saying, “[Congressman Weiner] will request a short leave of absence from the House of Representatives so that he can get evaluated and map out a course of treatment to make himself well.”

The statement went on to say, “Congressman Weiner takes the views of his colleagues very seriously and has determined that he needs this time to get healthy and make the best decision possible for himself, his family and his constituents.”

That is not the end of Weiner’s problem police are investigating an allegedly twitter relationship he had with a 17 year old Delaware girl whom he met when he spoke at her high school.  Both the girl and her mother claim the messages were not inappropriate.

Minority Leader and former Speaker of The House Of Representatives,  Nancy Pelosi said in a statement urging him to resign: “I urge Congressman Weiner to seek that help without the pressures of being a Member of Congress.”

Why don’t I think this is over?  What more is going to come out in the Weinergate scandal?