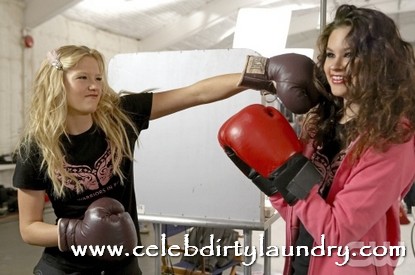 Last week on America’s Next Top Model Monque, 19, from Hebron, Illinois was sent home, seven girls remain.   Alexandria did not go home last week ughhh and she continues to be annoying I am not sure how she is surviving.  This week “Gossip Girl” stylist Eric Dman is a guest Judge and the models compete to represent Ford’s “Warriors In Pink” campaign.

So without further ado let’s start with tonight’s recap!  Brittani is speaking about how shocked she was that Alexandria was not in the bottom two.  They get back to the house and Brittani’s picture is displayed and underneath there are pink bags and in the bags there are things for “Warrior in Pink” for breast cancer awareness.  The girls continue to talk about they cannot stand Alexandria.  She drives everyone in the house nuts.   Alexandria is talking about how she feels attacked.

The girls go to Smashbox studio and meets Nigel Barker who tells them they are going to do their part for breast cancer.  The models wear fashions designed for Ford’s “Warriors in Pink” campaign and compete to appear in a national print ad.   The winner also gets a huge surprise, and the shoot ends with an angry confrontation.    The winner of the challenge was Alexandria and she was very happy.  Her co-star is a 2012 ford focus and Nigel tells her the car is hers.  She says she did not have a car and she is happy.

The girls are trying to decide whether to tell her what they think of her or give her the silent treatment.  Meanwhile, Alexandria cannot understand what she has done to make the other girls mad.

Miss J come to the house and wakes the girls up he takes the models on a field trip to Universal Studios for a VIP tour, where they are joined by Jay Manuel for a shoot with photographer Miguel Starcevich and “Gossip Girl” stylist Eric Daman.

Today they are going to have the models show them how crazy about fashion they are.  Mr. Jay tells them the more extreme they are the better.  Each girl will be assigned a theme.

Molly – crazy for accessories – she is looking very uncomfortable.  They love her picture.  In the beginning she was awkward but she finally got it and the shot was great.  Perfect pic!

Brittani – crazy for shoes – they love her she had a great personality and did a good job.  It is a sweet shot but it is not the best she has done.  They feel she raised her game and it is the best shot!

Hannah – crazy for handbags – Mr. Jay says it is a hot crazy mess.  He feels she is a little forced and forgot to model.  They think the photo is fantastic, but the film was not great.

Jaclyn – crazy for makeup – Mr Jay says she is natural.  They feel the shot is gorgeous.  Nigel thinks it is her best picture ever.  Every frame was good.

Kasia – crazy for hair – He liked Kasia tried to do things different.  They loved the shot and her body launguage is amazing.  She really got into it.  She is fabulous.

Alexandria – crazy for fur – Mr. Jay said she was gorgeous.  They think she is modelling, high fashion and her face was good.   But, it is not deraged for fur, she missed what the challenge was about.  The picture is not great.

Mikaela – crazy for sales – Mr. Jay feels she is just looking and does not know what to do.  He felt she was overwhelmed.   They felt she has a hard time finding a moment and the picture did not come across as well as it could.  They felt she did not understand the assignment.

Nigel is telling Brittani she was very unprofessional the way she said that Alexandria did not deserve to win in front of the client.  Tyra is telling her if she did not think she should have won she should have shut up and shown some respect.  Brittani walks off the stage.  She comes back and the judges ask why she left she says she had a panic attack.

They are going to panel

First girl called & Best Picture –  Jaclyn and her picture will be displayed in their home.

Runner Up for best photo – Molly

The bottom two are  Brittani and Mikaela