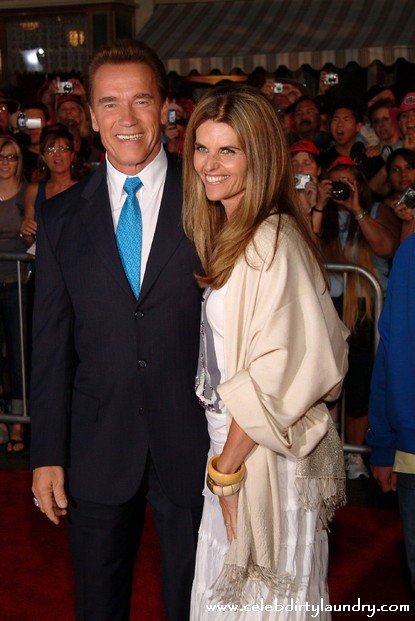 Arnold Schwarzeneggar And Maria Shriver have separated. The facts regarding the cause of the split are scarce but to me its clear that Arnold intends to return to his old womanizing ways now that his political career is over.   When Arnold married Maria it was clear that his was a move designed to acquire respectibility and substance. As a former Governor about to embark on a grand Hollywood adventure he no longer needs Maria. In fact she will be a hindrance to him as gets back to playing the field.

Arnold was always very assertive about going after what he wanted – and now he wants to be free to be a retirement aged stud.

The People version of the story appears here:

‘After a 25-year marriage as one of the nation’s leading power couples in Hollywood and politics, Arnold Schwarzenegger and Maria Shriver have split up, they say in a joint statement.

“This has been a time of great personal and professional transition for each of us,” they say. “After a great deal of thought, reflection, discussion, and prayer, we came to this decision together.

At this time, we are living apart, while we work on the future of our relationship,” they continue. “We are continuing to parent our four children together. They are the light and the center of both of our lives. We consider this a private matter and neither we nor any of our friends or family will have further comment. We ask for compassion and respect from the media and the public.”

Shriver, 55, a TV journalist and member of the Kennedy dynasty, and Schwarzenegger, 63, the Austrian-born bodybuilder/action movie hero who became a Republican California governor, have seemed like an unlikely couple since they married in 1986.

They had four children, ages 14, 18, 20 and 21, and long projected the image of a close and loving couple, despite – and sometimes even because of – their differences. During a 2003 political campaign, Shriver strongly defended her husband against allegations he had a history of groping women while he was an actor, and Schwarzenegger went on to become governor.

Schwarzenegger left the governor’s office last January after an increasingly difficult term, and there have been reports he’ll re-start his movie career, including a role in another Terminator film.’