Arnold Swarzenegger Signs Up For Next Terminator Flic – ‘I’ll Be Back’ For Real! 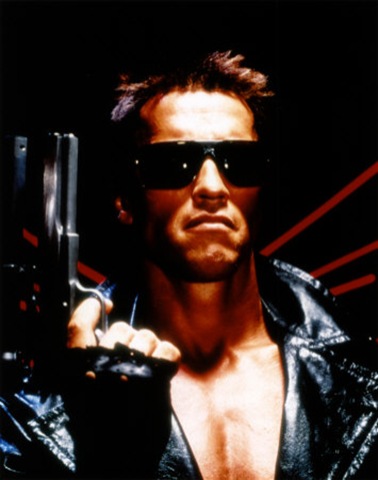 Arnold Swarzenegger’s making good on his most famous film pledge – I’ll be back –  by signing up for the next Terminator movie. The actor-turned-politician, who stood down as Governor of California in January, has joined forces with Jumanji producer Robert Cort to work on the new film, which will see him return as the butt-kicking cyborg, T-800.

The idea is being hawked around various Hollywood studios but with Arnie on board, it’s guaranteed to spark off a bidding war.  Sony and Lionsgate are likely to bite, having launched a failed bid for the rights in February 2010. Hedge fund Pacificor eventually snapped them up for $25 million.

But Universal is also after a piece of the action, lining up Fast Five director Justin Lin to direct.  A revival of the franchise, which began with the 2009 movie Terminator Salvation starring Christian Bale, floundered when the company ran out of money.

With the rights reverting to creator James Cameron in 2018, the studios are up against a tight deadline, especially if they plan to capitalize on the star’s return with sequels. Arnie starred in the first three Terminator movies, between 1984 and 2003, before winning the Californian election and earning himself the tag, The Governator.

Last year he made his return to acting with a cameo in The Expendables, alongside Sylvester Stallone and Bruce Willis.  He is rumoured to have signed up to play a sheriff on the Mexican border in action movie The Last Stand as well as working on a cartoon, The Governator.  But this Terminator reprise shows us beyond any doubt that Arnold is done with politics for good.