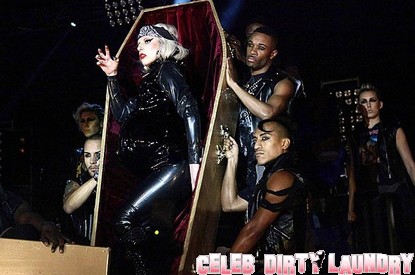 Arriving on stage in a coffin with a soccer ball under her top Lady GaGa made a typically outrageous entrance on stage to open her BBC Radio 1’s Big Weekend concert.  Emerging from the velvet-lined box for her only British festival appearance this year, she opened with Born This Way.

Removing the soccer ball she performed a free hour-long show for 20,000 in Carlisle which was also live on BBC Three.  GaGa, in funereal black outfits throughout, wept during her current single Edge Of Glory, which was dedicated to her grandad.  The set also included older hits Bad Romance and Poker Face.

She changed the words to jazz standard Orange Colored Sky to include mentions for Kate and Wills.  GaGa explained: “When I was in the United States I wished I was at the Royal Wedding. I want to be the girlfriend of a handsome prince.”

After a third costume change, GaGa wore an eye mask, leather studded jacket, bra, and hot pants – with a crucifix on her crotch – to perform Judas.

Earlier, in her Winnebago with a cup of tea, she told Bizarre: “Because it’s a festival I wanted it to be a little more rogue.”  “I’ve been working really hard since I’ve been over in Britain but I’m hoping to hit the pub on Monday when I’ve got some time off.”  “I’ll have a beer and a Jameson whiskey on the rocks. That’s my drink.”