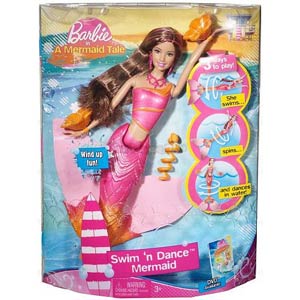 Cardboard packaging for the children’s favourite doll uses material from Indonesia’s hardwood trees.  Tests on boxes for Barbies sold in Britain, America and Germany are claimed to have revealed their origins.  According to environmentalists, Indonesia’s rainforest is being destroyed at a terrifying rate – putting wildlife such as orangutans at severe risk.

Environmental campaigners Greenpeace plan a campaign calling on Barbie’s boyfriend Ken to dump her, saying: “I don’t date girls who are into deforestation.”

At least a dozen Barbie lines made by Mattel may be involved in the scandal. Barbies including the Swim ‘n’ Dance Mermaid sell for up to $50. Other Mattel toys such as Snow White may also be involved.

Greenpeace said: “It’s shocking forests are being trashed to make packaging for toys.” Mattel said it has “a forward-looking commitment to the world in which we live”.

Give me a break – if the world’s rainforests are being destroyed then it is not the fault of any particular business or product – it is a consequence of human development and economic progress – when you are willing to go back to living the way we did a couple of hundred years ago only then do you have the moral right to bitch about deforestation.