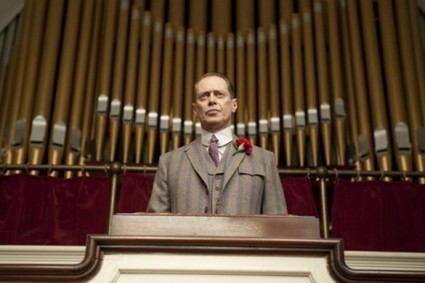 In the second episode of the second season of Boardwalk Empire called ‘Ourselves Alone’  it appears that everyone is turning against Nucky Thompson and he looks very upset as he starts to lose control of Atlantic City.  In the opening scene Margaret says “Whose again you?” to Nucky and he replies: “All of them!”  If you missed last week episode of the show read our official recap here!

Official synopsis: When realizing that he might be losing control over Atlantic City, Nucky tries to figure out which one of his men betrayed him. When agents search the Treasurer’s Office for evidence, Margaret tries to dig into her past to help Nucky in the present. In New York, Rothstein puts Jimmy on hold, but Meyer Lansky and Lucky Luciano still look to be business partners. Chalky faces problems in prison with inmate Dunn Purnsley, who has an ax to grind. Owen Sleater, a man working for John McGarrigle, looks at the Thompson residence. Finally, the Commodore decides to introduce Eli to the men who made Atlantic City.

Although everyone is turning against him, I would not count Nucky out.  He will not go down without a fight.   Did you watch last week’s show it really opened up with a bang and I am looking forward to this season.  Take a look at the preview video and let us know what you think in the comments below!