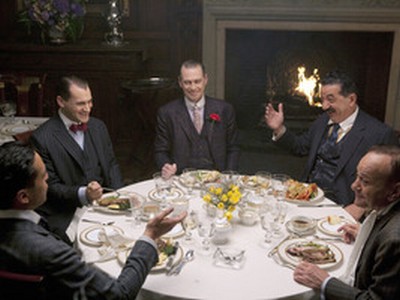 The the sixth episode of Boardwalk Empire is called ‘The Age Of Reason.’  On last night’s episode Eli starting to question his alliances and went to see Nucky but the only thing Eli managed to do is cause himself bigger problems.  Jimmy got attacked by one of The Commodore’s cronies and decided to take revenge.    If you missed tonight’s episode you can read our official recap here!

Episode Synopsis: Nucky tries to set up a risky liquor delivery to Philadelphia. Later, Attorney General Daugherty sees a problem that might complicate Nucky’s case. Jimmy finds a new mentor in Leander Whitlock (Dominic Chianese) who is the Commodore’s lawyer. Margaret finally goes to confessional. Lucy continues to struggle with loneliness while Van Alden tries to settle his conscience.

In the opening scene of the preview we see someone hanging upside down in the butcher shop with Jimmy watching and later we see Jimmy as he says “I’ve started something, I got to see it through no matter what”   It looks like things are really escalating, there is a lot of gun shooting going on in the preview.  Toward the end of the preview we see Myer Lansky saying ‘Nucky and Rothstein, their time has passed’  So Nucky’s problems are far from over, enjoy the promo.

Did you watch last week’s show?  I loved it, how about you?  Take a look at the preview video and let us know what you think in the comments below!