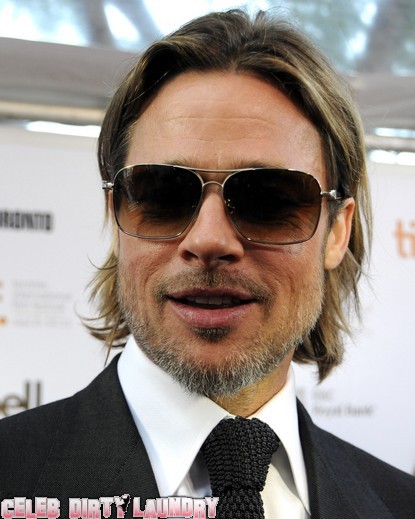 Brad Pitt gave an interview to Parade magazine yesterday where he discussed his marriage to Jennifer Aniston. Today, he has issued a statement to clarify his comments on his ex-wife, just in case they were misinterpreted.

From the interview, yesterday:

“I spent the ’90s trying to hide out, trying to duck the full celebrity cacophony. I started to get sick of myself sitting on a couch, holding a joint, hiding out. It started feeling pathetic. It became very clear to me that I was intent on trying to find a movie about an interesting life, but I wasn’t living an interesting life myself,” Pitt said of the decade, in which he drew moviegoers to theaters with films such as Se7en, Seven Years in Tibet, Meet Joe Black and Fight Club. And then Brad dropped the bomb… “I think that my marriage [to actress Jennifer Aniston] had something to do with it. Trying to pretend the marriage was something that it wasn’t.”

After he came under fire for his comments on Jennifer, Brad has issued a statement through his rep saying that his words were misinterpreted.

He said, “It grieves me that this was interpreted this way. Jen is an incredibly giving, loving and hilarious woman who remains my friend. It is an important relationship I value greatly. The point I was trying to make is not that Jen was dull, but that I was becoming dull to myself — and that, I am responsible for.”

What did you think of Brad’s comments? Think he went too far with them? Or did you get what he was trying to say? Is he backtracking now that he’s got a little bit of negative press about the comments? Sound off in the comments and let us know what you think!